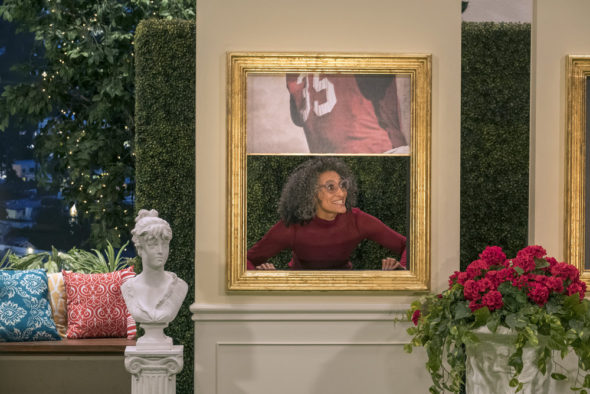 Is Jane Lynch still playing games with the Peacock Network? Has the Hollywood Game Night TV show been cancelled or renewed for a seventh season on NBC? The television vulture is watching all the latest cancellation and renewal news, so this page is the place to track the status of Hollywood Game Night season seven. Bookmark it, or subscribe for the latest updates. Remember, the television vulture is watching your shows. Are you?

The first part of the sixth season of Hollywood Game Night (which aired during the 2018-19 broadcast season) averaged a 0.46 rating in the 18-49 demographic and 2.33 million viewers. Compared to season five, that’s down by 51% and down by 43%, respectively.

Will NBC cancel or renew Hollywood Game Night for season seven? The show can’t be too expensive to produce, and it’s a good utility player for the network, able to fill in gaps in the schedule as needed. Still, the ratings are way down so I wouldn’t be surprised by a cancellation. I’ll update this page with new developments Subscribe for free updates on any Hollywood Game Night cancellation and renewal news.

Status update: The last episode aired in July 2020 so the Hollywood Game Night show is presumed to have been cancelled.

What do you think? Were you hoping that Hollywood Game Night would be renewed for a seventh season? Are you sorry that NBC cancelled this TV show, instead?