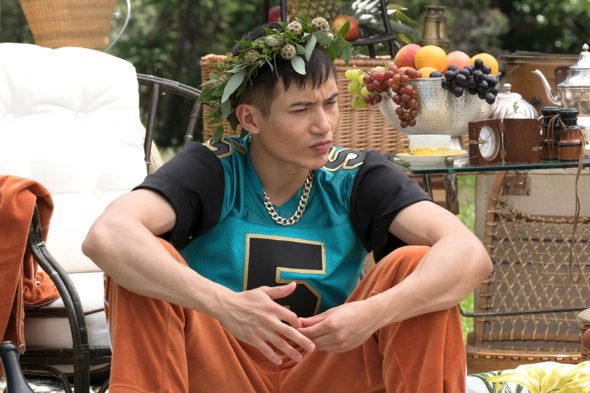 The comedy series centers on Eleanor Shellstrop (Kristen Bell) who, after dying, mistakenly ends up in The Good Place — instead of The Bad Place — where she truly belongs. The cast also includes Ted Danson, William Jackson Harper, Jameela Jamil, Manny Jacinto, and D’Arcy Carden.

If you watch The Good Place, you know Jason Mendoza (Jacinto) is obsessed with former Jacksonville Jaguars player Blake Bortles. The quarterback recently moved to the Los Angeles Rams, so will the news ever reach Jason?

Don’t think we didn’t think about that. But the problem is, once Bortles is off the Jaguars — and the way that Jason and all sports fans work — it’s just like, ‘You’re dead to me.’ Jason is just such a tribalist and such a Jacksonville loyalist that he is always going to be a Jaguars fan, no matter what.”

And what about a cameo from Bortles? Schur wasn’t optimistic, but he did say the NBC series will keep up the references:

I can guarantee you that we will make reference to his real-life employment situation. But I think it’s far less likely that he actually appears on the show at this point — at least…. Never say never.”