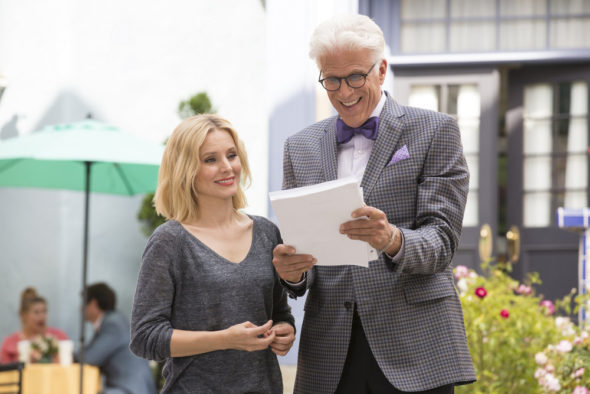 NBC did not order a full 22-episode first season of The Good Place. Does that spell trouble for this freshman sitcom? Has The Good Place TV show been cancelled or renewed for a second season on NBC? The television vulture is watching for the latest cancellation and renewal news, so this page is the place to track the status of The Good Place, season two. You can bookmark this page or subscribe for the latest updates. Remember, the television vulture is watching your shows. Are you?

Airing on the NBC television network, The Good Place follows Eleanor Shellstrop (Kristen Bell). After she dies, the thoughtless Eleanor mistakenly ends up in The Good Place — instead of The Bad Place — where she truly belongs. With the help of her soulmate Chidi (William Jackson Harper), Eleanor tries to keep her secret from the architect of The Good Place, Michael (Ted Danson), as she tries to find the good (or at least decent) person within. The cast also includes Jameela Jamil, Manny Jacinto, and D’Arcy Carden.

The first season of The Good Place on NBC has been averaging a 1.35 rating in the 18-49 demographic with 4.72 million viewers. Compare its standing against the other NBC TV shows we are tracking.

To no surprise, NBC has renewed The Good Place for a second season. The numbers dropped quite a bit over the course of the first season. Hopefully, some of those viewers who stopped watching can be enticed to catch up and tune in for season two.

What do you think? Do you think The Good Place TV show should have been renewed for a second season? How would you feel if NBC had cancelled this TV show, instead?

Love this show! Great Season 1 finale! I did not see that coming!

My wife and I just finished all available episodes on netflix. We love this show, cant wait to see next season.

This is honestly a very entertaining show! The actors play their roles amazingly and make the show awesome. I’d love to see a season two and how it plays out! Good job Michael Schur, you wrote a great show! It’s very unpredictable which I love because most shows are pretty predictable!

can’t wait for season 2 – I forking love this show!