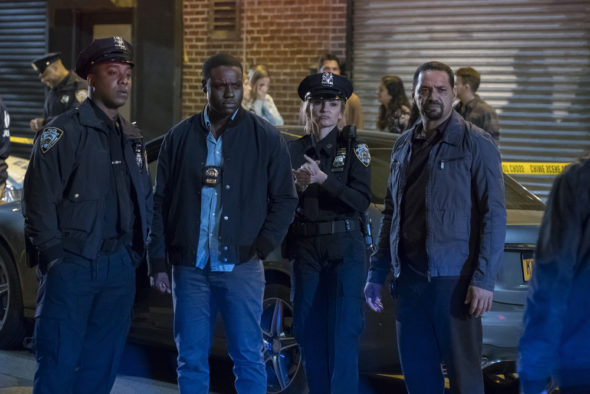 Have Harlee’s trials and tribulations come to an end? Is the Shades of Blue TV show cancelled or renewed for a fourth season on NBC? The television vulture is watching all the latest cancellation and renewal news, so this page is the place to track the status of Shades of Blue season four. Bookmark it, or subscribe for the latest updates. Remember, the television vulture is watching your shows. Are you?

The third season of Shades of Blue is averaging a 0.52 rating in the 18-49 demographic and 3.16 million viewers. Compared to season two, that’s down by 32% and 27%, respectively. Find out how Shades of Blue stacks up against other NBC TV shows.

When NBC announced the season three premiere date, they also announced this was the third and final season of Shades of Blue. While we don’t have to wonder whether it is cancelled or renewed for season four, I’ll still keep a hungry on the ratings. If there’s any word of a spin-off or revival, I’ll update this page. Subscribe for Shades of Blue news alerts.

What do you think? Is the Shades of Blue TV series ending at the right time? If it were up to you, would NBC cancel or renew this TV show for a fourth season?

Shades of Blue is one of the best tv series’s I have ever watched! There should be a season 4! Sad it was canceled! There has to be a different ending!

Please renew Shades of Blue. Loved it! With Jennifer & Ray

I was very late to the party 2-1-22. That said, only 3 seasons is so sad. However, Best series I’ve ever seen. What’s that …. they say, something about small packages? Sorry I didn’t see it sooner ! It was genius! All thumbs up. Cast could not have been better. Superb, superlative, awesome and cutting edge. J-Lo n Ray a one-two combination that was a 1st round knockout.