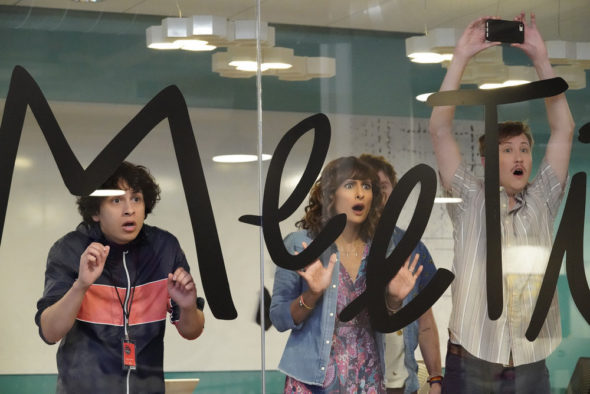 Are things getting better or worse for Emet? Has the I Feel Bad TV show been cancelled or renewed for a second season on NBC? The television vulture is watching all the latest cancellation and renewal news, so this page is the place to track the status of I Feel Bad season two. Bookmark it, or subscribe for the latest updates. Remember, the television vulture is watching your shows. Are you?

An NBC sitcom, I Feel Bad stars Sarayu Blue, Paul Adelstein, Madhur Jaffrey, Brian George, James Buckley, Zach Cherry, Johnny Pemberton, and Aisling Bea. The sitcom centers on Emet Kamala-Sweetzer (Blue), the head artist at a video game company and a married mother of three. Although Emet feels pressure to be perfect at everything in her life, like the rest of us, she’s just muddling through. Consequently, she can’t stop feeling guilty about any number of things and knows all too well her shortcomings as a wife, mother, and professional. She may not know what she’ll be bad about next, but she always knows it’s just around the corner.

The first season of I Feel Bad averaged a 0.56 rating in the 18-49 demographic and 2.51 million viewers. Find out how I Feel Bad stacks up against other NBC TV shows.

Will NBC cancel or renew I Feel Bad for season two? Looking at the ratings, my gut tells me that this comedy will be cancelled. In addition, NBC has decided not to order any installments past the initial 13 episode order. I’ll update this page with breaking developments but I would be shocked if I Feel Bad got a second season renewal. Subscribe for I Feel Bad cancellation or renewal alerts.

Status Update 5/10/2019: I Feel Bad has been cancelled; there will be no season two. Details here.

What do you think? Did you hope I Feel Bad would be renewed for a second season? How do you feel now that NBC has cancelled this TV show, instead?

I absolutely love I feel bad. The show reflects the daily challenges of balancing work, famuly, and personal relationships never forgetting that issues can and well pass when approached with sensativity, humor and enthusiasm. Please keep this diamond on the air for a second season! It surely will gain greater momentum with time and lip service.

When is Season 2 of I feel bad?

I powered through the first season but this show just doesn’t do it for me….Not only would I not be mad if they cancelled it I actually hope they do.

Interesting you didn’t like it yet was able to watch the entire series. As far as network shows go that’s a win in my opinion.

We love this show! I hope it doesn’t get cancelled.

I really hope I Feel Bad does not get cancelled. Enjoy the parents relationship w/each other and their kids as well as their elderly parents. Good for everyone to see a 3 generation family. My only suggestion is perhaps to come up w/a more upbeat title for the show. The current title might not convey how fun and funny the show can be.

I really hope it doesn’t get cancelled. I don’t have a cable package, but my girlfriend and I watch “I Feel Bad” every week on Hulu. Why don’t those ratings count? It’s an extremely funny show that hits home for many people. KEEP IT ON THE AIR!!