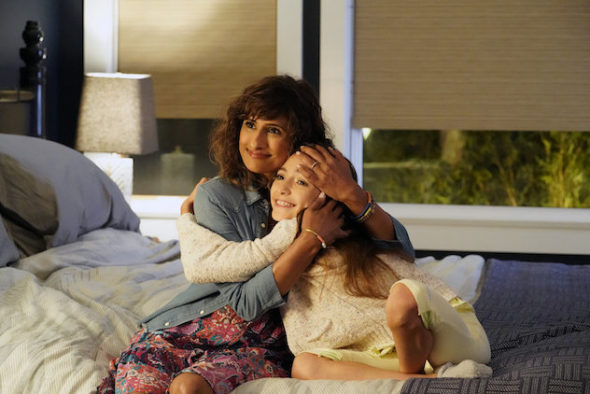 The peacock network has announced winter premiere and return dates for a number of their comedy series — Brooklyn Nine-Nine, Will & Grace, and The Good Place. Superstore is going on an extended hiatus and won’t be back until sometime in March. Another comedy, I Feel Bad, is unlikely to return at all. Has it been cancelled?

An NBC family comedy, I Feel Bad stars Sarayu Blue, Paul Adelstein, Madhur Jaffrey, Brian George, James Buckley, Zach Cherry, Johnny Pemberton, and Aisling Bea. The sitcom centers on Emet Kamala-Sweetzer (Blue), the head artist at a video game company and a married mother of three. Although Emet feels pressure to be perfect at everything in her life, like the rest of us, she’s just muddling through. Consequently, she can’t stop feeling guilty about any number of things and knows all too well her shortcomings as a wife, mother, and professional. She may not know what she’ll bad about next, but she always knows it’s just around the corner.

How’s it doing in the ratings? The series debuted with a pair of episodes in mid-September and, while the premiere did okay, the second installment saw a serious drop. The ratings continued to drop as the weeks progressed and the I Feel Bad series is averaging a meager 0.66 rating in the 18-49 demographic with 3.01 million viewers. It is NBC’s lowest-rated comedy series and their lowest-rated scripted series that doesn’t air on a Friday night.

NBC opted not to pick up any additional episodes so the first season will end with its 13th installment in December. It seems clear that I Feel Bad is headed for cancellation but NBC’s press release relates that a decision on the show’s fate has not been made as yet.

The release also notes that the network has ordered short seasons of shows like The Good Place and AP Bio in the past. The Good Place initially did well in the ratings and has enjoyed some critical success. AP Bio drew low ratings last spring and was surprisingly renewed. So, perhaps I Feel Bad still has a slim chance but I suspect that the sitcom won’t be coming back.

What do you think? Do you like the I Feel Bad TV show? Do you think it will be cancelled or renewed for a second season on NBC?

I think it’s hilarious! I love the grandparents. Emet is very relatable to many working mothers today. I hope NBC gives this show a chance. Putting it on against the reboot of “Murphy Brown” was a mistake. Maybe they will bring it back in a different time slot that gives it a better chance.

I love it! !!! Nice to have clean family content. Hysterical real family.
Situations. Leave it on with the comedy line up its with.

This is a better show than AP Bio which is just rude, crude & way over the top. As it is totally unbelievable in any sense there is really no point to that show. I Feel Bad however is true to the stress women feel in today’s world where we still have the guilt feelings for not being everything to everyone. They could improve it by not making her co-worker young men all so stupid and nerdy. She needs a female to bounce some of her crazy off of also.

It’s the only NBC comedy I like and watch.