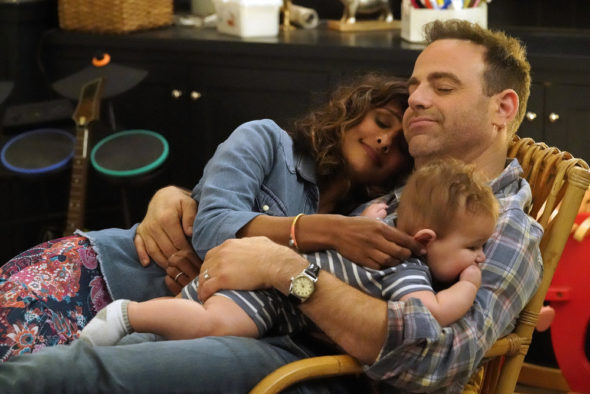 TV show description:
A sitcom from executive producer Amy Poehler, and writer Aseem Batra, the I Feel Bad TV show is inspired by the Orli Auslander book, I Feel Bad: All Day. Every Day. About Everything.

The head artist at a video game company, Emet Kamala-Sweetzer (Blue) is also a married mother of three. She and her husband, David Sweetzer (Adelstein), have a solid marriage. She’s a good mom to her own kids and has a close (if sometimes frustrating) relationship with her parents Maya (Jaffrey) and Sonny Kamala (George).

From home and family to work and friends, Emet is just trying to figure it out — like all of us. More often than not though, she feels like none of her options are great, and the choices she makes don’t make things all that much better.

She’s not above dragging her staff into her personal life, has been known to deny knowledge of her children when they act up in public and has the occasional sexy dream about someone other than David. Still, at least she has the grace to feel guilty about it.

Of course, that’s part of the problem. Emet can’t stop feeling guilty about any number of things. She knows all too well her shortcomings as a wife, mother, and professional. She may not know what she’ll bad about next, but she always knows it’s just around the corner.

Series Finale:
Episode #13, “There’s Never Enough Time”
When work threatens to get in the way of Emet’s vacation, she finds a creative solution to spend some time away with her family. She asks the guys at GamePunch to housesit while she’s away.
First aired: December  27, 2018

What do you think? Do you like the I Feel Bad TV series? Should this NBC TV show be cancelled or renewed for another season?

This one was awesome you could laugh when it was funny instead of background laughter laughing at things that weren’t even funny! A multi culture show with kids issues parents that pretended to interested in something they could care less about and being stuck with noisy Parents that lived to close to hide! Something for kids 30 something and older people!

Good show, made us laugh.

This show had potential