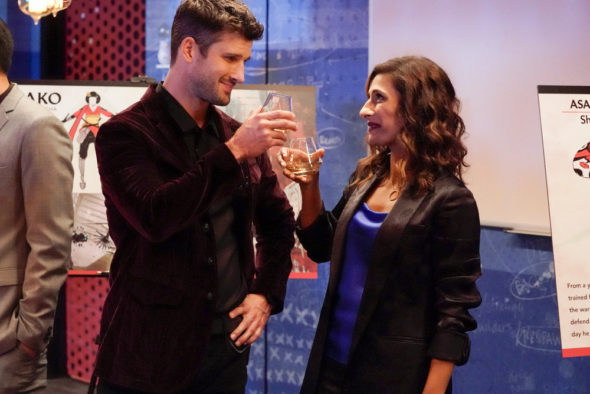 It seems that Emet’s time to figure out her life is up. NBC has cancelled the I Feel Bad TV show after one season of 13 episodes. There won’t be a second season for the comedy series.

Based on a book by Orli Auslander, I Feel Bad stars Sarayu Blue, Paul Adelstein, Madhur Jaffrey, Brian George, James Buckley, Zach Cherry, Johnny Pemberton, and Aisling Bea. The sitcom centers on Emet Kamala-Sweetzer (Blue), the head artist at a video game company and a married mother of three. Although Emet feels pressure to be perfect at everything in her life, like the rest of us, she’s just muddling through. Consequently, she can’t stop feeling guilty about any number of things and knows all too well her shortcomings as a wife, mother, and professional. She may not know what she’ll be bad about next, but she always knows it’s just around the corner.

The first season of I Feel Bad averaged a 0.56 rating in the 18-49 demographic and 2.51 million viewers. Compared to the other scripted NBC TV shows of the 2018-19 season, I Feel Bad ranked in 16th place in the demo and was in 15th place in overall viewership.

The last two episodes aired on December 27th, seemingly an indication that NBC had given up on the comedy series.

What do you think? Did you enjoy the I Feel Bad TV show on NBC? Would you have watched season two of this sitcom?

I liked it a lot. Ugh. So sick of finding a good show that doesn’t get renewed. Make More!

Yes! I thought the show was funny, and I looked forward to seeing it every week.
I’m sorry it was canceled.

I loved this show!!! Very funny! I don’t understand why all the stupid reality shows and other crappy shows get to stay on, but not comical shows, like this one!!!!

I loved this show! Please renew for a second season!

I really liked this show!!!! BUT…. I must say my FAVORITE actors were the ones who played the parents of Emet!!! They were so mega funny!!!! Maybe they will have their own show someday???!!! ☺️

We loved it , and always watched it as a family, so sad it’s cancelled.

Why do they take off funny shows? And leave crappy shows on like The bachelorette or the Bachelor, the voice, American idol, Survivor ? All crappy old worn out shows?! But get rid of funny ones?

I loved this show! My daughter and I would watch it together all the time. The actors were really talented and it broke out of the standard sitcom family mold. So sad to see it go!