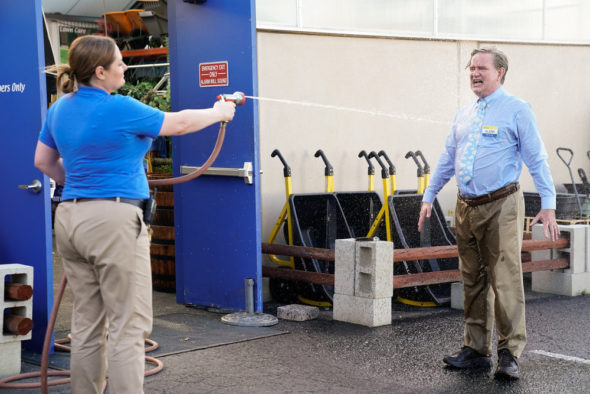 Will you be visiting Cloud 9 in the sixth season of the Superstore TV show on NBC? As we all know, the Nielsen ratings typically play a big role in determining whether a TV show like Superstore is cancelled or renewed for season seven. Unfortunately, most of us do not live in Nielsen households. Because many viewers feel frustrated when their viewing habits and opinions aren’t considered, we invite you to rate all of the sixth season episodes of Superstore here.  *Status Update Below.

An NBC workplace comedy series, Superstore stars Ben Feldman, Mark McKinney, Lauren Ash, Colton Dunn, Nico Santos, Nichole Sakura, and Kaliko Kauahi. This sitcom revolves around the diverse and unique employees at a big-box megastore called Cloud 9. At the center is Jonah (Feldman), a passionate optimist always looking out for his co-workers. They include the sardonic Garrett (Dunn), the sweet and fun-loving Cheyenne (Sakura), and the perpetually dismissed Sandra (Kauahi). Back in the manager job is Glenn (McKinney), who once again finds himself butting heads with aggressive assistant manager Dina (Ash). Glenn is now assisted by Mateo (Santos), who’s pretty sure he would be running things by now if it weren’t for his undocumented status. From bright-eyed newbies to seen-it-all veterans to the clueless seasonal hires and the in-it-for-life managers, the crew tackles the day-to-day grind of rabid bargain hunters, riot-causing sales, and nap-worthy training sessions.

What do you think? Which season six episodes of the Superstore TV series do you rate as wonderful, terrible, or somewhere between? Do you think that Superstore should be cancelled or renewed for a seventh season on NBC? Don’t forget to vote, and share your thoughts, below.

*12/4/20 update: Superstore has been cancelled by NBC so, there won’t be a seventh season.

ugh..seriously? couldn’t watch 5 minutes of it

So sad to see this show go. It was clever and out of the normal funny with all the different characters. I had a feeling they were on their way out as the Covid storyline was ridiculous for any show to write about or to ignore. They were damned if they do or damned if they don’t. I enjoyed every episode and it was always clean humor. I don’t watch sitcoms to get a moral message or political push, I watch sitcoms to escape all of that and this show did that for me. I still go back and watch… Read more »

Love the show even after America left her own show. What makes it funny is how the back ground actors complete the show like in that snow storm where they had to spend a night at the store, and one guy just started putting puzzles together off the shelf and how they have customers that buy things you would never think of to buy and how there’s employees that question the customer on what their buying or the tornado episode where the one guy is out in the parking lot around up the shopping carts while everything is blowing by… Read more »

Great show. Is Nielsen really getting accurate feed back using these methods? Nielsen collects data by electronic point of sale (POS) data from stores through checkout scanners. In emerging markets where POS information is unavailable, we use field auditors to collect sales data through in-store inventory and price checks. I have seen to many good shows cancelled like Superstore. Grimm was one of them. What ever happened to the spinoff? Shares of blue, the series, which boasts the star power of Jennifer Lopez and Ray Liotta, has officially cancelled after Season 3 with only ten episodes. I could go on… Read more »

I only watch Superstore because of America Ferrera (Amy), and Ben Feldman (Jonah).
It’ll be interesting to see how things go without Amy. If Jonah can’t hold the show together I will no longer watch the show. All the other actors are far too over the edge for me.

I watch Superstore every week. If it wasn’t for America Ferrera as Amy, and Ben Feldman as Jonah, I would not watch this show. Was to over the edge for me, otherwise.
Don’t dispair Superstore cast, I’m a 74 year old who likes none over the edge sitcoms, like
Last Man Standing, etc…

p.s. and I loathe Trump