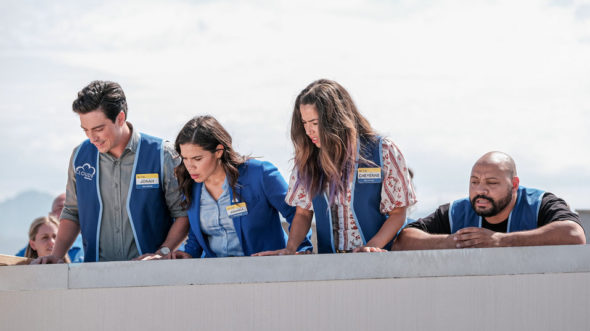 Is this show a bargain? Has the Superstore TV show been cancelled or renewed for a sixth season on NBC? The television vulture is watching all the latest cancellation and renewal news, so this page is the place to track the status of Superstore, season six. Bookmark it, or subscribe for the latest updates. Remember, the television vulture is watching your shows. Are you?

The fifth season of Superstore is averaging a 0.72 rating in the 18-49 demographic and 2.83 million viewers. Compared to season four, that’s down by 13% and 7%, respectively. Find out how Superstore stacks up against other NBC TV shows.

Will NBC cancel or renew Superstore for season six? Though the ratings are low, it’s NBC’s highest-rated sitcom (which isn’t saying much) so, I think it will be renewed. For now, I’ll keep an eye on the ratings and update this page with breaking developments. Subscribe for free alerts on Superstore cancellation or renewal news.

2/11/20 update: NBC has renewed the Superstore TV show for a sixth season.

What do you think? Are you glad that the Superstore TV show has been renewed for a sixth season? How would you feel if NBC had cancelled this TV series, instead?

So glad Superstore is coming back. A great & different type sitcom.

PLEASE keep Superstore! Its more relative than ever to real life. Superstore is an ” Essential Business “

This the funniest show I’ve in years. Great, smart writing, excellent cast. I really enjoyed “Seinfeld” but week in and week out “Superstore is MUCH funnier.

Every episode has several laugh out loud moments from a variety of the cast members. Hilarious, I highly recommend “Superstore”.

Even though this season has not been as good as previous seasons (seems as if they’re trying to cram too much into each show and delivery of lines by the cast is rushed) I still watch every week and hope this show is renewed. Don’t really like Amy as boss.

No. no .i want superstore is funny and i like sometime they take care each other.and it almost is like a real live.

Even though the ratings are bad, it’s still NBC’s highest comedy so I think it’ll be renewed.

When you’ve only got like 6 scripted sitcoms on television, it’s not exactly acting like this is the 70’s or 80’s when sitcoms ruled! This thing is going to start losing NBC some money at some point, because advertisers won’t want to pay for less and less eyeballs watching.