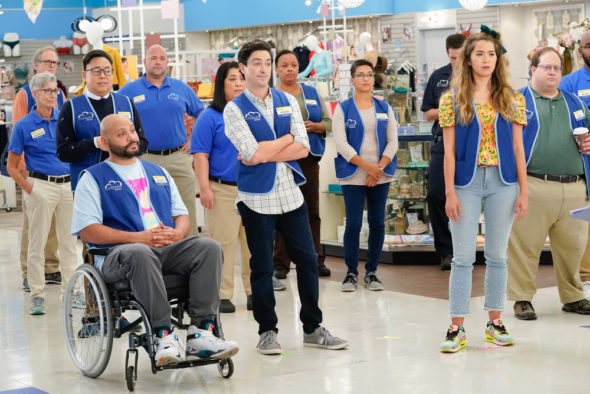 The doors of Cloud 9 doors are closing during the 2020-21 television season. NBC has revealed that the Superstore TV show is ending and won’t have a seventh season.

Airing on Thursday nights, the sixth season of Superstore averages a 0.53 rating in the 18-49 demographic and 2.42 million viewers. Compared to season five, that’s down by 27% in the demo and down by 15% in viewership.

· After 113 episodes, NBC’s critically acclaimed comedy “Superstore” will be concluding at the end of its current sixth season.

· Through its own comedic lens, the series has consistently examined many of the country’s most topical issues, including health care, immigration, unionization, the plight of the retail worker and many more.

· “Superstore,” which reached more than 37 million viewers last season, has consistently been one of NBC’s strongest comedies.

· Following the winter hiatus, “Superstore” returns to the NBC lineup on Thursday, Jan. 14 at 8:30 p.m. There are currently 11 more episodes to air this season, which will end in the spring.

· “‘Superstore’ has always been a signature NBC series that has never failed to make us laugh while also thoughtfully examining important issues people care deeply about,” said Lisa Katz, President, Scripted Content. “This has been an amazing group of writers, producers, actors and crew to work with and we are incredibly grateful for all their contributions. This show will forever hold its place among the top workplace comedies for which we have a cherished history.”

· “We are incredibly proud of this show and the stories we were able to tell within the walls of Cloud 9,” said Universal Television President Erin Underhill. “We want to thank Justin Spitzer, who created this show, current showrunners Jonathan Green and Gabe Miller, all the writers, cast and crew. Not only did they bring us a comedy full of heart and humor, but ‘Superstore’ also became one of the most socially impactful series on television.”

· “We’re grateful to Universal Television and NBC for letting us make 113 episodes of a show we’re so proud of, and for giving us the chance to work with such an incredibly talented group of actors, writers and crew,” said executive producers Justin Spitzer, Gabe Miller and Jonathan Green. “We’re thankful most of all to the viewers who’ve stuck with us for the past six years (or discovered us somewhere along the way). We’ll do our best to go out strong and give you the satisfying ending you deserve.”

· “Superstore” is produced by Universal Television, a division of Universal Studio Group, in association with Spitzer Holding Company, Miller Green Broadcasting and The District.

What do you think? Are you a fan of the Superstore TV show? Are you sorry that it’s ending? Would you have tuned in for season seven on NBC?

I enjoyed this show and it wasn’t because of America. It was because of the rest of the cast and all the wacky characters they played. It was fun and I needed that during this pandemic. We all need that.

I’m absolutely sad to see this show ending and I believe it deserves a seventh season. The show is so funny and has great dialogue. Very sad…