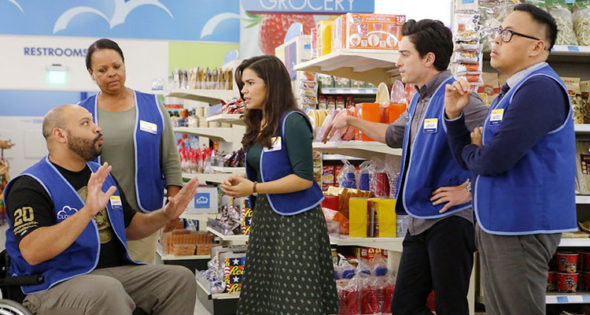 Should this sitcom about a big box store stay for open for business? Has the Superstore TV show been cancelled or renewed for a fourth season on NBC? The television vulture is watching for the latest cancellation and renewal news, so this page is the place to track the status of Superstore, season four. You can bookmark this page or subscribe for the latest updates. Remember, the television vulture is watching your shows. Are you?

Airing on the NBC television network, Superstore stars America Ferrera, Ben Feldman, Colton Dunn, Nico Santos, Nichole Bloom, Mark McKinney, and Lauren Ash. This sitcom revolves around the diverse employees at a super-sized megastore called Cloud 9. Amy (Ferrera) is the glue that holds the place together while newer hire Jonah (Feldman) wants to prove that work doesn’t have to be boring. From bright-eyed newbies to seen-it-all veterans to the clueless seasonal hires and the in-it-for-life managers, the crew tackles the day-to-day grind of rabid bargain hunters, riot-causing sales, and nap-worthy training sessions.

The third season of Superstore on NBC averaged a 1.01 rating in the 18-49 demographic with 3.70 million viewers. Compared to season two, that’s down by 11% in the demo and down by 6% in total viewers. Compare its standing against the other NBC TV shows we are tracking.

The third season of this comedy continues to do well (when compared to season two) so I believe Superstore will be renewed for a fourth season. I’ll watch the ratings and will update this page as needed. Subscribe for free updates on any cancellation or renewal news regarding Superstore.

2/21/18 update: NBC has renewed Superstore for season four. Watch the cast and crew, and get the details here.


What do you think? Do you think that the Superstore TV show should be renewed for a fourth season? How would you feel if NBC cancelled this TV show, instead?

I’m a superfan of Superstore. Please don’t cancel it.

Please leave at least Superstore to enjoy. You have canceled all other shows with this kind of humor and I don’t watch the any of the 15 different versions of NCSI.

Please renew this great series, will never miss an episode unless they are canceled.

Wife and I binged on show Saturday evening. Loved it and could not stop laughing. Hope it continues and looking forward to ep 16 on 22nd