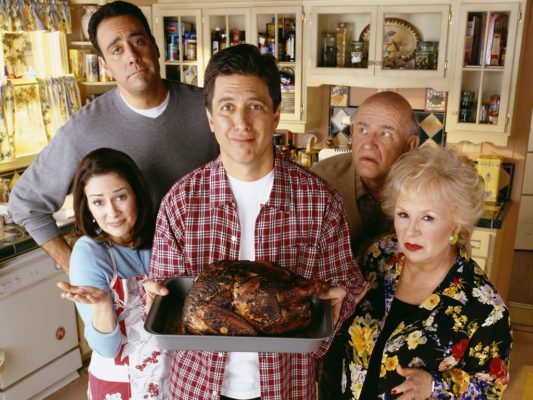 Could Everybody Loves Raymond be coming back? Recently, creator Phil Rosenthal spoke with CinemaBlend about the possibility of a reboot for the CBS TV show.

In the interview, Rosenthal said he has no interest in reviving Everybody Loves Raymond:

I know what you’re going to ask and the answer is no. I’ll never say never, but look, we lost three of our cast members, right? It’s never going to be the same again, it can’t be. Plus these shows usually aren’t the same again anyway. We did the show exactly the way we wanted to. If you love the show and love those characters, they’re still available, thankfully, in syndication. You can always visit your friends. . . . I think to try and recreate that (now), it’s like we don’t ask football players at 70 years old to go out on the field and let us tackle them again, right?”

But what about a reunion special? Rosenthal says he’s down for that:

Here’s what I would do. I would happily do a reunion show where we get together and we reminisce about the show. You can see how everybody looks if you’re interested. You can see them interacting. They’re pretty close to their characters anyway. And we can show clips and tell stories about the times we had, and that way you can revisit them now.”

What do you think? Are you a fan of Everybody Loves Raymond? Would you watch a reunion special?

MY FAVORITE SITCOM WAS AND STILL IS EVERYBODY LOVES RAYMOND! IT’S HYSTERICAL. I AM SO SICK OF THESE STUPID ASSANINE REALITY SHOWS!!!!!!!!!!!!

great show makes me laugh and happy about myself.
please bring back this tv show for another
5 seasons most shows today lousy and boring. the kings of queens was boring
and no story line.

yes, a reunion show would be fun to see. I agree though a new series would not be the same. My favorite character, Frank, is no more.

Great show. A special could be made in which the adult cast reumes their roles for the funeral of Marie with dialog revealing that Frank had paassed years earlier.

Oh yes, please do a reunion show. I watch the reruns every night. It’s still one of the best shows on television.

Yes do a reunion special!!I would love to see Ray and Debra again. I watch the reruns every night. Best show ever.