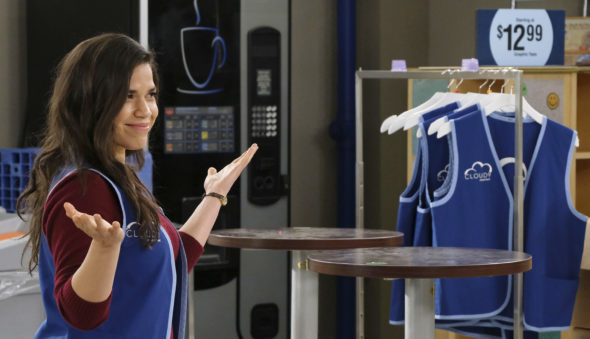 Amy is returning for one more shift. NBC has announced that America Ferrera will return for the sitcom’s one-hour finale on Thursday, March 25th. Ferrera was supposed to depart the show at the end of season five but, due to the pandemic shutdown, she stuck around to film farewell episodes as part of season six. NBC announced that Superstore would be ending this year in December and the series finale was completed earlier this month.

Following the recent news that NBC’s “Superstore” will be closing the doors of Cloud 9, America Ferrera is confirmed to reunite with the cast once more as a final farewell to the series.

Ferrera will appear in the one-hour series finale on Thursday, March 25 at 8 p.m. ET/PT.

“Superstore” is produced by Universal Television, a division of Universal Studio Group, in association with Spitzer Holding Company, Miller Green Broadcasting and The District.

What do you think? Do you enjoy the Superstore TV series? Are you planning to watch the series finale on NBC?

I am so sad this show is ending. I had no idea! Even without America, all those other actors made Superstore a super fun watch for me. The characters they portrayed were such spot on perfection that I feel almost anyone of them could have easily had their own spin-off. Especially, Marcus! Even his back story is priceless! Definitely one of my faves, for sure. Cheyenne was a super close 2nd…loved her relationship with Mateo. Sandra was adorably funny, as well, and loved her relationship with her new son, Tony, that was developing. But REALLY loved them all! Will sorely… Read more »

I have really loved this show and I am sorry they are taking it off. The cast was outstanding and I really missed America and her relationship with Jonah. One of my favorite comedy shows!!!

I didn’t even notice she was gone this season. They could have easily kept this show on air without her…

Not happy that this show is ending. I looked forward to the laughs every week. Every cast member was a favorite,they worked so perfectly together.Sad 🙁

I’m still holding out hope that this is only being canceled on NBC, but will become a Peacock exclusive.

My feelings about this are bittersweet. On the one hand it’ll be nice to see her again, but on the other hand I feel that too much importance was put on on her role in the show.

Basically that killed the show when she left even though (for me) the quality has been as good as when she was there. We really needed 9 seasons for Cloud9.

Yes! 9 seasons for Cloud9! Of course I’d love there to be more but 9, at least, would’ve been apropos.

I am glad America is returning for the finale and sad that it is ending. I have thoroughly enjoyed this sh9w.