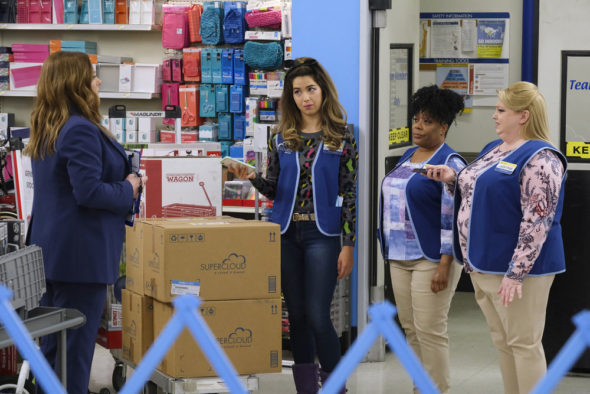 Superstore is ready to wrap up its run on NBC later this month, and the cast has now filmed its series finale. The cast shared images and messages as they prepared to say goodbye.

Ben Feldman, Mark McKinney, Lauren Ash, Colton Dunn, Nico Santos, Nichole Sakura, and Kaliko Kauahi star in the series which follows the employees of a Cloud 9 retail store. The series finale is set to air on March 25th on NBC. The series was cancelled by the network late last year.

Fans could see some characters from Superstore again, however. A spin-off series is in early development. Check out the posts from the cast on social media below.

Well…that’s a wrap for me on Season 6 of Superstore! What a journey from Female Employee #2 to JANET aka Janay! She was unapologetically acerbic and honest with a heart of gold…
Typecasting? Maybe just a smidge🤣 #Superstore pic.twitter.com/9lV3zHNmre

Last day of school. I am not ok. #Superstore

What do you think? Are you sad to see Superstore end? Do you plan to watch the series finale later this month?

This was one of my favorite shows. I miss not having new episodes to look forward to seeing, but at least I can still rewatch all the seasons on Peacock & Hulu. It’s still very saddening to see the series end, though.

I’m really going to miss Superstore. Hopefully another network or streaming service will pick it up.

I was hoping it was going to be picked up for Peacock.

So sad, this one has ended entirely too soon. It was smart & funny never failing to make me laugh out loud.

I will miss this show – I enjoyed it so much. And I always literally laughed out loud during every episode