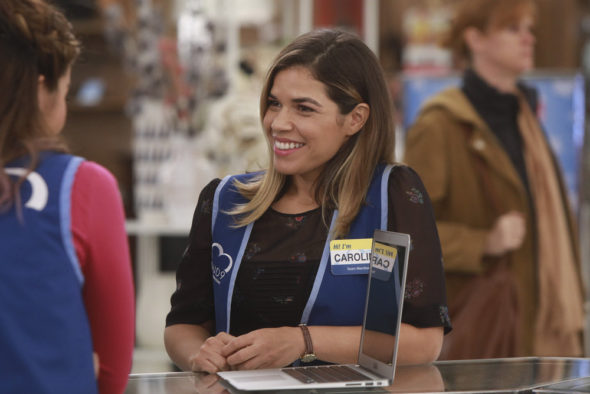 Is Ugly Betty coming to NBC? Star American Ferrera recently revealed she’d like to see a crossover between the ABC TV show and Superstore, Deadline reports.

Ferrera played Betty Suarez on Ugly Betty for four seasons before ABC cancelled the series in 2010. Currently, Ferrera plays Amy Sosa on the NBC sitcom Superstore, which is in the middle of its fourth season.

I love Betty and it would be so interesting to go back and try and play her again. It would be fun to see Amy and Betty interact – they’re so different.”

While there are no plans at the moment for an Ugly Betty/Superstore crossover, Ferrera did reveal what drew her to the NBC sitcom after Ugly Betty ended:

I came off of Ugly Betty and wasn’t on a show for five years and part of what drew me to the character of Amy was that I was playing this sunny young woman that the world couldn’t knock down and that was fun and exhausting and felt like one experience of womenhood, where you wake up everyday and put on a smile and make people feel inspired and Amy was on the exact opposite of that spectrum. She doesn’t feel the need to smile and that was so [interesting] to me to explore what it was like to walk in the world as a woman without trying to make people like you. It was a great experience to go from Betty to Amy and I would love to see those two women [together].”

What do you think? Are you a fan of Ugly Betty and Superstore? Would you like to see a crossover?

I would be thrilled to see Betty meet Amy! Have the magazine do a spread on Cloud 9 fashion, and bring in several of the Ugly Betty cast members. Or, just have Glenn hire Betty’s sister or brother, or Mark (having lost his job due to print media dying). There are dozens of ways to tie the two shows together, and we the audience get to enjoy the results