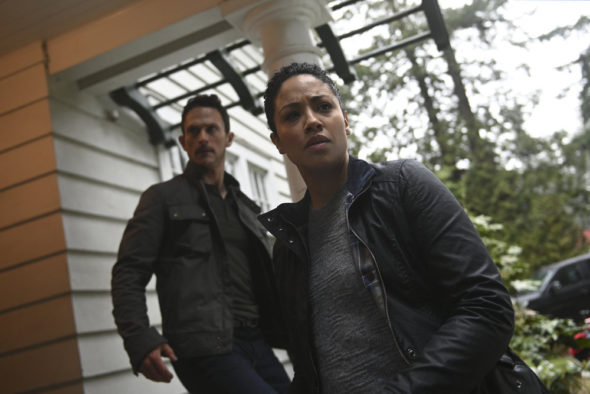 Members of a secretive international agency named Orbital are tasked with figuring out what the wreckage is, where it came from, and most importantly — what it can do.

But, they have no choice but to trust each other as they track down the debris scattered across the Western Hemisphere. Each fragment has unpredictable, powerful, and sometimes dangerous effects on the everyday people who find it.

Every discovery is also a race against time because shadowy outside forces seek these objects for nefarious purposes.

Series Finale:
Episode #13 — Celestial Body
Bryan and Finola’s lives are changed forever as Maddox and INFLUX converge on the Debris they seek.
First aired: May 24, 2021.

What do you think? Do you like the Debris TV show? Do you think it should have been cancelled or renewed for a second season?

Debris should have totally been renewed. The characters had so much development that would have caught many in the second season. A total shame. I’ll stick to streaming TV now.

I was really looking forward to the 2nd season. As the mystery surrounding what the debris can actually do was building. Please renew for another season.

This was a great show and should have been renewed–a thought-provoking, intelligent show. Why would this get canceled and some other silly nonsense shows get renewed? Does not make any sense. Promote these better shows more so folks find out about them… Give this another chance!!

I loved Debris. It was a very int4elligent show, well written and acted. Bring it back Peacock!

I’m really upset this show was canceled. There’s not many good shows on tv anymore. Hope they change their minds and bring it back