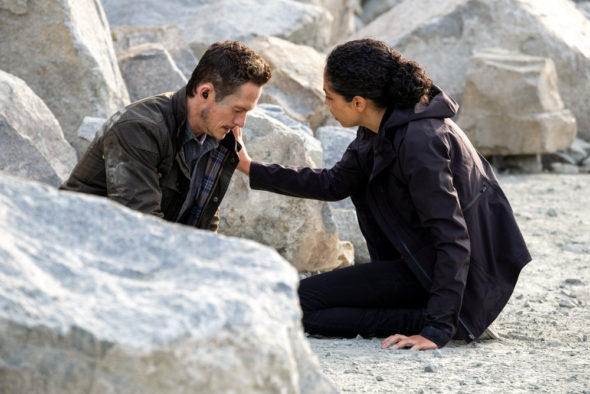 Debris aired its first season finale on Monday, and the future of the series is still up in the air. With the finale ending with a cliffhanger, viewers are wondering if the series will return.

Both the creator of the NBC series, J.H. Wyman, and the star of the sci-fi drama, Jonathan Tucker, spoke about the future of the series with Deadline.

Wyman said the following about the choice to end the season with a cliffhanger:

“You know, it’s like, yeah, we always say that, but the first season of a show is always supposed to be an origin story, and that people are supposed to grab the handlebars and say now what the show is, okay, I get it. But then, we’re supposed to recontextualize it as you move forward, and, it’s no mistake that Sebastian Roché’s last line is, plays the character of Brill, is, “Let’s begin,” because it’s supposed to just completely change your expectations, and realize there’s so much more to come.”

Tucker was also positive about the future of Debris. He said the following:

“The smartest leaders in business invest in people over ideas, and while Debris is a great idea, it’s run by an even better person. And you know, when you are in, again, probably any business, but I can speak specifically to the creative endeavor of entertainment, you have to take a leap of faith with people, and you take a leap of faith with the machines, with your acting partners, and the crew that comes together.”

If the show is cancelled, Wyman says:

Well, if the worst case is to happen, that, they decide that they weren’t going to continue this, I would look for other avenues to continue telling this story, because I think that the story itself is really a story worth writing about, and so much more to tell.

I would say that, that even if it didn’t work out at NBC, I would try to get it somewhere somehow., I really believe in the show, and I love, love, love my fans. I love the people that believe in this work, and last thing, and I want to give them something that they enjoy.

It is not known when NBC will make a decision about the future of the sci-fi series.

What do you think? Do you want to see a second season of Debris on NBC? Would you watch the show on a different channel or service?

Debris is a good show please do renew it for season 2. Please find a different channel for it. Like The X-Files.

This was a keeper! UGH! I’m very bummed! Please try to continue this somewhere else!!!!!!

YES, its spooky and unpredictable and i want to see what happens next, next again, and next after that. like a previous similarly eerie series that was ended prematurely, flashforward, when i had a coworker ask me “what does it mean?’ and i answered, “exactly! what DOES it mean?!” i want to see where the storyline could go, it could go SOOO many different different directions. and maybe more than one . . . ?

Far too many decent science fiction (and other tv shows) are cancelled way too quickly. Clever, thoughtful, funny, sharp programmes are lost on the scrap heap before the show has even had a chance to begin unveil itself. Debris has that level of complexity and thought that normal tv networks are scared of. Hopefully, another network or streaming service will take it on board. It has potential for worldwide appeal! Too much reality tv has meant cheap, dumbed down shows take precendent over clever dramas! It’s really irritating to invest your time into something without a conclusion or shortened by… Read more »

Ditto on Michelle’s comments below. I thought Debris is a new great show, I will watch wherever.

I can’t believe that this show has been cancelled! I’m so sick of all the best sci Fi shows being dumped! It’s like if you need to use your brain to understand it,then it gets cancelled! Bull#@t!

It is really smart TV. Not catering to the lowest common denominator.
It’s easy to quit making good tv. Also cheaper. I hope it finds a home with a station that deserves it. It is why network tv is fading into obscurity.

I loved this show. How could they cancel it. Everyone I know watched it. please find another channel to put it on even if I have to pay extra to watch it it.

I really hope the show stays on. I don’t care what channel. My bf actually started watching it with me and that almost never happens!

Maybe since it is a scifi show try putting it on the scifi channel. Please find another channel to put it on if NBC decides to cancel it. I love the show. They can’t leave us hanging with a cliff hanger like that!!

Please find a new home for Debris. The most intelligent shows never seem to make it! Loved the way the story was unfolding…there is an audience for good SciFy…Debris was one of the best to come along in awhile!