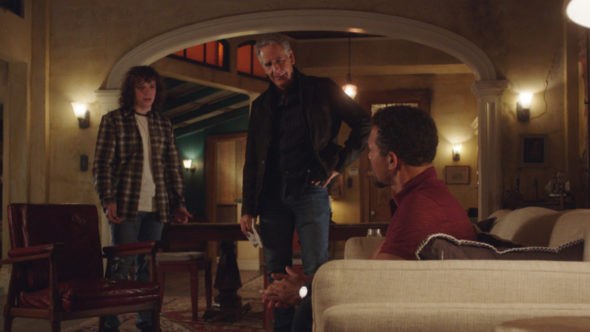 NCIS: New Orleans wrapped on CBS after seven seasons on Sunday night, and now, executive producer Christopher Silber has revealed what fans would have seen if it had returned for an eighth season.

The procedural drama ended with Agent Dwayne Pride (Scott Bakula) being given the chance to spend more time with the son he never knew he had. Vanessa Ferlito, Necar Zadegan, Charles Michael Davis, Rob Kerkovich, Daryl “Chill” Mitchell, and CCH Pounder also starred in the drama following the NCIS office in New Orleans.

Silber said the following about what would have happened next on NCIS: New Orleans, per TV Insider:

“Certainly we would have wanted to explore and we were excited about exploring Pride’s relationship with his son and digging deep into that and seeing what that means to discover that you have a son who is nearly fully grown and to try to build a relationship and try to build those ties. It would be challenging for sure. We thought that the young man who played Connor was fantastic and there was great chemistry with Pride and with Jimmy as well. As well as solve incredibly interesting and fun Navy crimes.”

As for seeing the characters from the CBS series again, fans could see them on NCIS or the new NCIS: Hawaii at some point, but there are no plans for that at this time.

What do you think? Did you want to watch an eighth season of NCIS: New Orleans on CBS?

I would to see NCIS New Orleans come back it was a great show, in a world of reality shows and game type shows they cancel a really good show really miss this show

NCIS New Orleans was the best. Since the poor judgement of canceling NOLA I have not watched any of the other NCIS shows. I seldom watch anything on CBS anymore. If the powers that be are not going to listen to the viewers then why contribute to any of their ratings

NCIS New Orleans was sooo much better than the Hawaii version.

I love this show and never missed it. If I was on vacation, I would stream it. So many of the shows I love are being canceled. CBS get your butt out of your a**. Yes, I am that angry!
Please another company, pick it up!

Bring this show back!! Great cast. So much chemistry. LA is a bit on the cheesy side