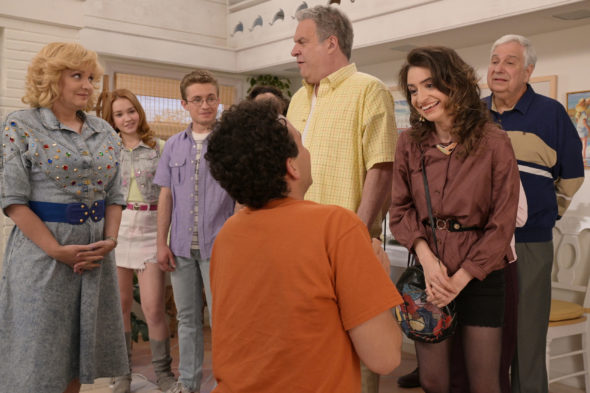 The Goldbergs and The Blacklist may air on different networks, but they are both products of Sony Pictures TV Studios. The president of Sony Pictures TV recently spoke about the future of both shows and the possibility of spin-offs for them and another Sony series, The Good Doctor.

Jeff Frost said the following about The Goldbergs (ABC) and The Blacklist (NBC), per Deadline:

As for The Good Doctor, fans could also see a spin-off of that series in the future.

“I think it’s always a possibility; it’s something we would love to see happen. Obviously we don’t want to do anything that is going to impact the mothership but at the same time we do think there is a potential for that.”

What do you think? Are you a fan of these three shows? Do you want more spin-offs? How long should they continue?

I am a fan of all three shows and would hate to see them be canceled!!!

I gave up on Blacklist when they took the ‘husband detour’, but gave it another chance several weeks ago – I’m back!!! If there’s ever an award for most twists and turns, no other series in the history of television would come close!!! EVEN ‘This is Us’!

Love the Good Doctor. Blacklist lost me early on with the whole husband not being who he was. Loved it the first season. James Spader is always great.
Goldbergs has run its course.

The Goldbergs are WAY past their prime. It is absurd to watch these “kids” as they are now all young adults still hanging with their parents. In this time period most children were ready & able to flee the nest. The Blacklist has been great but really- tell us all the big secret(s) & let us get on with our lives. It has been drug out way too long & I am losing patience and interest. And now “Elizabeth can never be an agent again. She can never live in the everyday world. She is now like me” Raymond Reddington… Read more »

Absolute extreme fan of The Blacklist! Hiwever, I am getting a bit exasperated. Who in the hell is Raymond Reddington?

And if it’s NOT James Spader, who is HE??

Also, The Chinese Doctor would be a GREAT spinoff for The Good Doctor

I love all 3 shows and would watch a spinoff of all 3. I liked the spinoff of Goldbergs but that was canceled. Great characters on all 3 shows.

As I already posted elsewhere, I’m predicting The Goldbergs have one more season left, and then will call it quits next year.

The Blacklist…. love the show, but I don’t see how it can go on much longer if Red has a terminal illness and Liz ain’t part of the FBI. Doesn’t seem to be sustainable unless they resolve both of those things. And – dare a Devil even say it – are they ever going to tell us who in Hell’s name Liz’s father is?? (Still say it’s Red… whether he’s the actual Raymond Reddington or not)

I like the blacklist and the Doctor I have not seen the other show but people have been watching theses shows for a year. I don’t think it is good for people to loose them now.

Awesome love those shows equally please keep continue it love it and enjoy it. Never missed any of it.