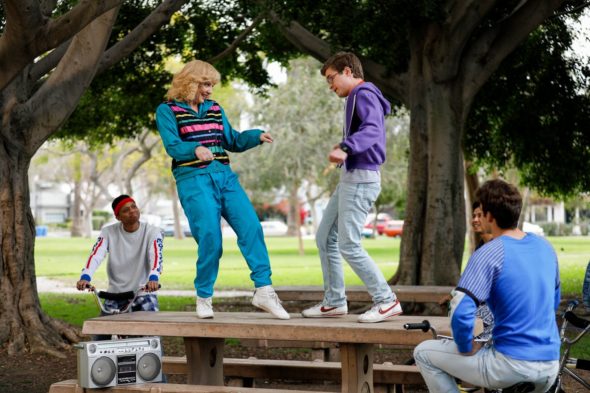 The Goldbergs are stayin’ golden for an eighth season. ABC just announced they’ve renewed the TV show for the 2020-21 broadcast season.

Set in Jenkintown, Pennsylvania, and loosely based on the experiences of series creator Adam F. Goldberg, this comedy looks at life as seen by a young boy growing up in the Goldberg family in the 1980s. The cast includes Wendi McLendon-Covey, Sean Giambrone, Troy Gentile, Hayley Orrantia, Sam Lerner, George Segal, Jeff Garlin, and Patton Oswalt (voice).

The seventh season of The Goldbergs averaged a 0.87 rating in the 18-49 demographic and 4.17 million viewers. Compared to season six, that’s down by 26% and 15%, respectively. The series still has a strong fan base, though. The Goldbergs is ABC‘s fifth highest-rated scripted series for the 2019-20 season.

What do you think? Do you watch The Goldbergs on ABC? Should season eight be the final season for this comedy?

The Goldbergs is one of the funniest shows around and Troy’s portrayal of Barrie is comedy genius.

The great thing about shows in the 80s is they generally knew when to end the show. Sometimes they went on a season or two too long, but they knew it was time to go. Knight Rider had to end. Alf had to end (even though it was a cliffhanger). Family Ties ended. All except Saturday Night Live, which outlasted it’s terrible seasons to be great again later in the decade and then eventually a show so bad in the new century it reminds me of those old Faces of Death videos… without the funny parts.