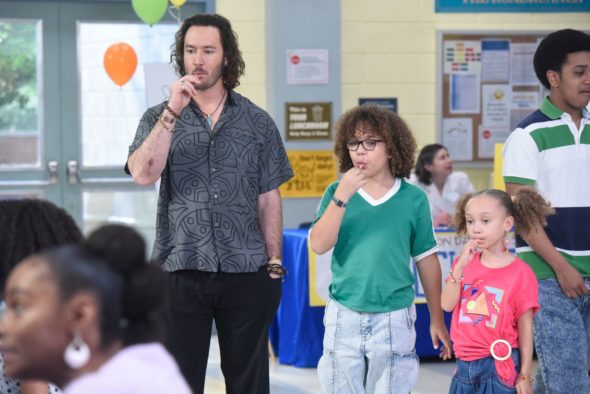 ABC is staying in the suburbs for the 2020-21 broadcast season. The network just announced they’ve renewed Mixed-ish for a second year.

A prequel to Black-ish, the sitcom sees Rainbow “Bow” Johnson (Tracee Ellis Ross) recount her experience of growing up in a mixed-race family in the 1980s, and the dilemmas they faced to acclimate in the suburbs while staying true to themselves. The cast also includes Mark-Paul Gosselaar, Tika Sumpter, Christina Anthony, Arica Himmel, Ethan William Childress, Mykal-Michelle Harris, and Gary Cole.

Ratings have been mixed for Mixed-ish since the show debuted in September 2019. Season one averaged a 0.65 rating in the 18-49 demographic and 3.00 million viewers.

Compared to other current scripted ABC TV shows, Mixed-ish is a middle-of-the-road performer in the traditional ratings.

What do you think? Have you seen the Mixed-ish TV show? Will you watch season two of this series on ABC?

yes, i will watch season two of mixed-ish

My husband, daughter and I enjoy the show. It is humorous and thought provoking. We like how adult Bow narrates young Bows feelings and life experiences. Yes, Grampa can be racist with his comments to say the least. Fortunately the show ‘s writers handle his remarks in a way that makes him look ridiculous. But In spite of his comments to Paul and Bow you understand that he absolutely loves his Grandkids. The family truly loves one another and tries to handle the world and all it’s problems in a positive way. Again, love the show , glad ABC had… Read more »

One of the most condescending, patronising, not to mention inaccurate shows ever made.

It truly makes my blood boil and I have rarely witnessed overt racism without shame in my entire life.

A true abomination that does more to present not only an untrue and wholly distorted image for younger viewers but also to create divides where they are not present and increase those that already exist.