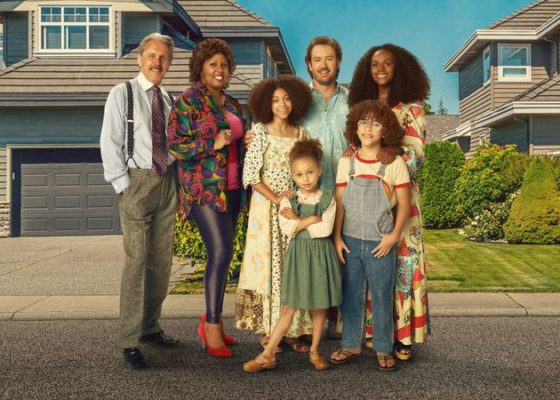 TV show description:
A prequel to the Black-ish TV series, the Mixed-ish sitcom is loosely based on the life of co-creator Kenya Barris’ wife.

As an adult, Rainbow “Bow” Johnson (Ross) recounts her experience of growing up in a mixed-race family in the 1980s, and the dilemmas they faced to acclimate in the suburbs while staying true to themselves.

Bow’s parents, Paul (Gosselaar) and Alicia (Sumpter), have decided to move from a hippie commune to the suburbs so that they can better provide for their family. As her parents struggle with the challenges of their new lives in a more typical community, young Bow (Himmel) and her siblings, Santamonica (Harris) and Johan (Childress), navigate a mainstream school in which they’re perceived as neither black nor white.

This family’s experiences illuminate the challenges of finding one’s own identity when the rest of the world can’t decide where you belong.

Series Finale:
Episode #36 — Forever Young
In 2021, Adult Rainbow, Johan and Santamonica recall very different accounts of what happened the summer that they all got their new bicycles. In the ’80s, an overprotective Alicia’s worst fear comes true when one of the kids goes off on their own with their bike and gets lost. Meanwhile, Harrison catches Denise spending extra time in the office to get overtime and puts her to work.
First aired: May 18, 2021.

What do you think? Do you like the Mixed-ish TV show? Do you think it should have been cancelled or renewed for a third season?

Enjoyed this show thoroughly! even more than blackish(even though a fan of anthony anderson) believe it was more reality with so many mixed relationships now a days. plus tiki is a great actress watched her for long time on for poorer or richer i believe show was she is great actress bring that back!

I enjoyed the show. For me, it served as a “bridge” to take another look at “Black-ish” and appreciate the subtle and “in your face” comedic irony facing “Bow and Dre”. The show should have gone on a few more years. I enjoyed the performances of all the actors and Gary Cole, has always been a favorite

It’s a shame Mixed-ish was canceled. I thought it was a great show.

I’m so disappointed that Mixed-ish was cancelled☹️ It was a look back at how uninformed/racist we were just 30 yrs ago. We have a long way to go, but this show reminded me how small minded folks were in a cringeworthy entertaining way.

Please keep the show. It sends an important message in a time that is needed. I think that people are slow to catch on because the world is changing but this has been a strong time of separation and racism. This show can help educate in a manner that people begin to hear.

I’m very sorry to read this show has been cancelled. I won’t be sarcastic about the continuation of Bachelorette, Bachelor etc… yikes!

I really like this show. Trying to wait patiently for it to return.

WHICH ROCKET SCIENCE WANTED TO CANCEL EMERGENCE?????
I WAS LOCKED IN AFTER 1/2 OF EPISODE 1.
I HEAR TALKING ABOUT IT THE NEXT DAY ON THE PUBLIC TRANSPORTATION AND TELLING THOSE WHO HAVEN’T SEEN IT GO BACK TO EPISODE 1 .
CANCEL IT NO!!!!!
GET WRITERS BUSY ON SEASON 2

I really didn’t care for the show. I found it to be too political and not entertaining for a comedy. I also don’t watch Blackish fir the same reason! You could cancel both shows and I would not care.

Everything isn’t about everyone. I understand how you feel though. The bare truth is not entertaining sometimes. In fact, there are some cringe-worthy moments for some people I imagine. But for me and my children? We see ourselves in this show, so it’s a good thing.

Personally, I couldn’t get into Black-ish either, but Mixed-ish is really great. Maybe cause I love Mark-Paul Gosselaar or I was a kid of the 80s & it makes sense to me.