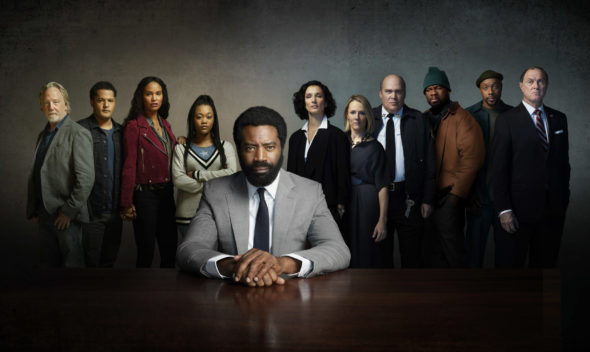 TV show description:
A legal and family drama series, the For Life TV show is inspired by the life of Isaac Wright Junior. The series follows the tale of Aaron Wallace (Pinnock), an incarcerated man who becomes a licensed lawyer while still in prison.

Wright litigates cases for other inmates while fighting to overturn his own life sentence for a crime he didn’t commit.

Wright’s quest for freedom is driven by his desperate desire to reclaim the life that was stolen from him and to get back to the family he loves – his estranged wife, Marie (Bryant), and his daughter, Jasmine (Harris).

Through the window of Wright’s ferocious struggle and complicated relationship with a progressive female prison warden (Varma), the series also examines the flaws and challenges in our penal and legal systems.

Series Finale:
Episode #22 — Andy Josiah
Aaron and his legal team face their toughest trial yet as they prosecute the police officer responsible for the killing of an innocent, unarmed Black man.
First aired: February 24, 2021.

What do you think? Do you like the For Life TV show? Do you think it should have been cancelled or renewed for a third season?

I was mesmerized by this show. It kept me glued to my tv I couldn’t wait to see what happened next. When it ended I just hoped a new series would be made. Superb acting loved Aaron Wallace please bring it back.

Great show so of course it was cancelled. Anything worth watching doesn’t seem to stay on tv. This show was one of the best dramas to be on tv in twenty years. A shame it was cancelled. This is definitely a show crying to be on the air for a third season or longer. I feel cheated it ended with unresolved issues. I want more.

Bring this show back!! It’s possibly the best legal drama series I have encountered to date. Viewings have increased since the show was cancelled through Netflix and and other streaming platforms. There’s plenty more to uncover in season 3- bring it back!

This show NEEDS to continue. It’s so timely and way better than most, especially better than “reality tv.” I agree with Mary S below.
Netflix, Peacock, someone PICK IT back up!!

OWN tv could pickup it up like they are going to do with “ALL RISE” …..yeahh!!!

U just leave us hanging like other networks do. U remove good shows and leave crap on like the Bachelor and shows like that. Put this show back on. It is about real people and happenings.

I’m so sad for life isn’t coming back. It will certainly be missed

Tyler Perry should pick it up! It’s an awesome show.