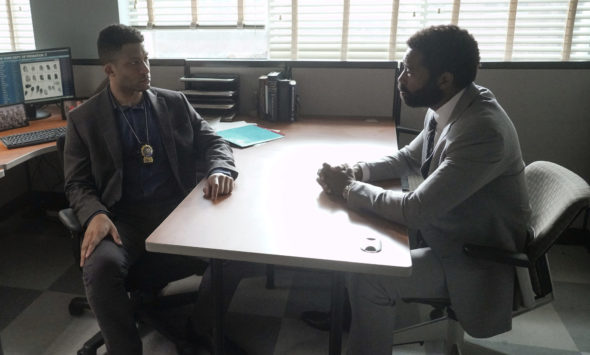 Can Aaron’s efforts prevail in the second season of the For Life TV show on ABC? As we all know, the Nielsen ratings typically play a big role in determining whether a TV show like For Life is cancelled or renewed for season three. Unfortunately, most of us do not live in Nielsen households. Because many viewers feel frustrated when their viewing habits and opinions aren’t considered, we invite you to rate all of the second season episodes of For Life here.   *Status Update Below.

An ABC legal drama, the For Life TV show is inspired by the life of Isaac Wright Jr. and stars Nicholas Pinnock, Indira Varma, Joy Bryant, Dorian Missick, Tyla Harris, and Timothy Busfield. The series follows the tale of Aaron Wallace (Pinnock), an incarcerated man who becomes a licensed lawyer while still in prison. Aaron litigates cases for other inmates while fighting to overturn his own life sentence for a crime he didn’t commit. In season two, Aaron continues his battle against the political machine that once put him away undeservedly while trying to rebuild his life on the outside. He has the continued help from the people who supported him — his family, wily one-time public defender Henry Roswell (Busfield), and his former prison warden, Safiya Masry (Varma).

What do you think? Which season two episodes of the For Life TV series do you rate as wonderful, terrible, or somewhere between? Do you think that For Life should be cancelled or renewed for a third season on ABC? Don’t forget to vote, and share your thoughts, below.

I recently read the update confirming that “For Life” has been cancelled by the network. I streamed the entire series, both season 1 & 2 repeatedly, because it was such a compelling storyline, that hasn’t been explored to it’s fullest on a major television network. Somehow, intuitively, I knew it would be too much to expect abc television network to renew the series for a third season. Well, that’s it for me. I’m done with abc.

Please bring back For Life. I just love this series and I was really looking forward watching many more seasons of this excellent show. For Life was one of the best series on TV.