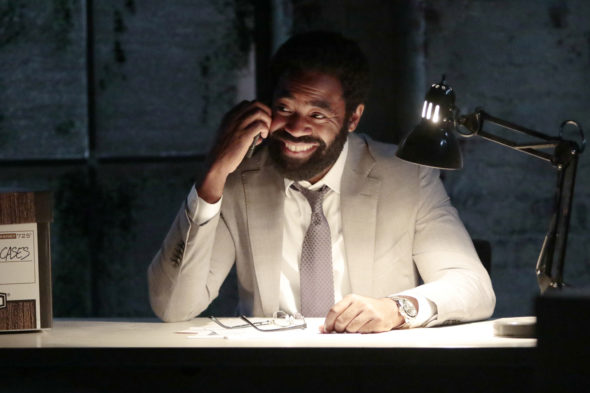 It looks like Aaron’s journey likely won’t continue into the 2021-22 television season. The For Life series has been cancelled so, there won’t be a third season — at least not on ABC.

Airing on Wednesday nights, the For Life TV show is inspired by the life of Isaac Wright Jr. and stars Nicholas Pinnock, Indira Varma, Joy Bryant, Dorian Missick, Tyla Harris, and Timothy Busfield. The series follows the tale of Aaron Wallace (Pinnock), an incarcerated man who becomes a licensed lawyer while still in prison. Aaron litigates cases for other inmates while fighting to overturn his own life sentence for a crime he didn’t commit. In season two, Aaron continues his battle against the political machine that once put him away undeservedly while trying to rebuild his life on the outside. He has the continued help from the people who supported him — his family, wily one-time public defender Henry Roswell (Busfield), and his former prison warden, Safiya Masry (Varma).

The second season of For Life averaged a 0.35 rating in the 18-49 demographic and 1.81 million viewers in the live+same day ratings. Compared to season one, that’s down by 38% in the demo and down by 26% in viewership. It is the lowest-rated scripted show on the network for 2020-21 and finished airing its 10 episode season in late February.

Sony Pictures TV co-produces the drama series with ABC Signature and is expected to shop a possible third season to other outlets. For Life, has reportedly performed very well on Hulu, the streaming service which has released episodes the day after their linear release.

What do you think? Do you enjoy the For Life TV series? Are you sorry that it’s been cancelled? Were you looking forward to watching the third season on ABC?

I can’t believe these great show was cancelled!!!!!! I just found it on Hulu this week and binged watched two seasons in a few days and I’m thristy for more! Which is why when I saw the last season 2 episode was from 2/24/2021 (about 2 weeks shy of a year) I searched the internet to see what the hold up was and found this article. I am soooo sad right now. The world NEEDED THIS SHOW!!! I pray there is still hope some other network picks it up or Hulu sees the viewership numbers and does it. I loooooved… Read more »

I really LOVED Life and it is very disappointing that it has been canceled…I hope and pray that another network picks it up to continue.

I really loved and enjoyed the TV show For Life. I was really looking forward to watching the third season. Really disappointed that season 3 has been cancelled. Like a lot of people in America I don’t have cable so I rely on subscriptions to ask or sites like Hulu Netflix and on Hulu for life was one of my favorite shows right now the show for life as we canceled canceled and I am really disappointed. It would be really awesome and much appreciated if season 3 would be allowed to air. I highly doubt that since the show… Read more »

I really enjoyed the series and can’t understand why the Network would not pick it up for a third season. I hope another network like OWN picks it up.

I really enjoyed the show and really hate hearing that it was canceled. I think one of the issues with the rating is because of the night it’s aired… I think if you would re-think the show night it would be more of a hit with all walks of live… Return “For Life”

I ,loved this show

I’m pissed there won’t be a 3rd season of “For Life”….It was an awesome show, and I just feel like people didn’t give it a chance!