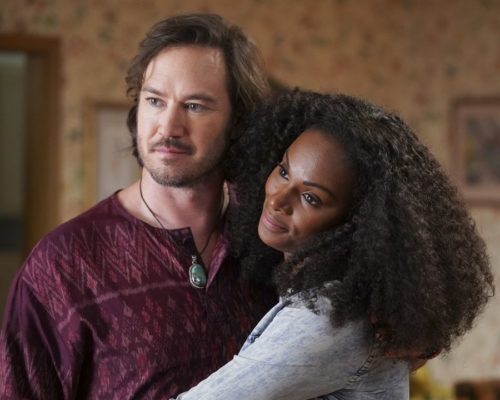 Is there room for another show in the Black-ish family? Has the Mixed-ish TV show been cancelled or renewed for a second season on ABC? The television vulture is watching all the latest cancellation and renewal news, so this page is the place to track the status of Mixed-ish, season two. Bookmark it, or subscribe for the latest updates. Remember, the television vulture is watching your shows. Are you?

Airing on the ABC television network, the Mixed-ish TV show stars Mark-Paul Gosselaar, Tika Sumpter, Christina Anthony, Arica Himmel, Ethan William Childress, Mykal-Michelle Harris, Gary Cole, and Tracee Ellis Ross (narrator). It centers around Rainbow “Bow” Johnson (Ross) recounting her experiences of growing up in a mixed-race family in the 1980s. Bow’s parents, Paul (Gosselaar) and Alicia (Sumpter), decided to move from a hippie commune to the suburbs so that they could better provide for their family. As her parents struggle with the challenges of their new lives in a more typical community, young Bow (Himmel) and her siblings, Santamonica (Harris) and Johan (Childress), navigate a mainstream school in which they’re perceived as neither black nor white. This family’s experiences illuminate the challenges of finding one’s own identity when the rest of the world can’t decide where you belong.

The first season of Mixed-ish averaged a 0.65 rating in the 18-49 demographic and 3.00 million viewers. Find out how Mixed-ish stacks up against other ABC TV shows.

Will ABC cancel or renew Mixed-ish for season two? The ratings are okay and this series is tied into Black-ish, which has been a good performer for ABC. I suspect that it will be renewed. I’ll update this page with breaking developments. Subscribe for free alerts on Mixed-ish cancellation or renewal news.

What do you think? Are you glad that the Mixed-ish TV show has been renewed for a second season? How would you feel if ABC had cancelled this TV series, instead?

Andrea Winieski . i have lived big city’s… grown and rooted small town. This is a show that makes love More understood ; more spread around. Maybe I’ve lost my fancy – now I’m just a small thing.:: but shows that make us STOP ! to think…Old to young …seem like something the “ climb“ of a reasonable human would want to see done…