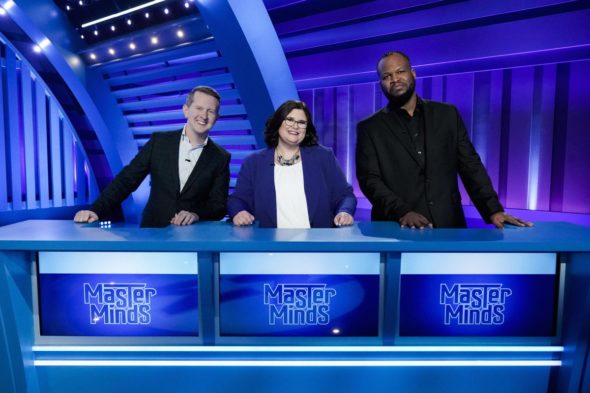 Master Minds is returning to GSN next month. The cable channel has set a premiere date for season two of the game show that puts contestants up against the greatest minds in a game of trivia. Brooke Burns is set to join the series as the new host, replacing Sherri Shepherd.

“In MASTER MINDS, three contestants square off against three trivia Master Minds in multiple rounds of intense trivia competition. The lowest scoring player on each side is eliminated until the top competitor and top Master Mind are left standing and now must face off, head-to-head, in the Ultimate Trivia Challenge. If the contestant can get more questions correct than the Master Mind, they will win $10,000 and come back to challenge the Masters again. If they win three games in a row, they join the ranks of the Master Minds and will appear in future episodes.

Actress and Emmy(R)-nominated television host Brooke Burns began her career with breakout roles in Ally McBeal, Baywatch, and Melrose Place. In 2002, she made her game show hosting debut on NBC’s Dog Eat Dog, and went on to host ABC’s You Deserve It with Chris Harrison. From 2013-2015 Burns served as host of Game Show Network’s Emmy(R)-nominated and wildly popular UK-adapted trivia show, The Chase, where she was also nominated for an Emmy(R) as Outstanding Game Show Host. Burns is also known for her starring roles on the Hallmark and Lifetime Channels, currently for the original movie franchise Gourmet Detective, and earlier films A Sister’s Revenge, The Most Wonderful Time of the Year, and Christmas Connection.”

What do you think? Are you a fan of Master Minds on GSN? Will you watch the third season?

Love Master Minds!! I was hoping for Season 3 that I thought was starting in December, ‘21. I hope, I hope!!!

Quite an enjoyable GameSpot! Brooke Burns is awesome! A fun and learning show!! Thank you

I love this show. If it’s cancelled I’m done the the game show network

I love master minds. Pls bring it back ASAP please

Why is Master Minds not on at 4 p.m. I miss it. Please return America Says to 5 p.m. so it doesn’t compete with the national news.

I love Master Minds and hope it will be back on soon.

I turned on master minds yesterday and it was not on. Where is it. Spectrum game channel

Yes I love Master Minds & I miss it as a daytime show on GSN. Brooke Burns is a great host.

Absolutely a fan, will continue to watch

I watch the show every night

I love MasterMinds! Please keep it on!