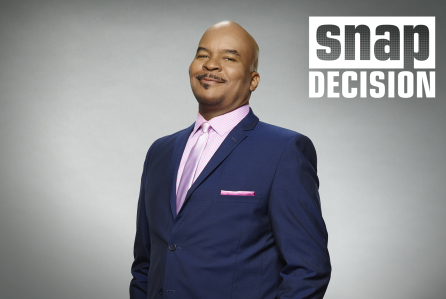 Hosted by David Alan Grier, Snap Decision “puts preconceptions, first impressions, and gut instinct to the ultimate test.” Also a game show, America Says “is an in-studio game where two teams of friends and family face off to match survey responses with fill in the blanks that cover every topic under the sun.” Meanwhile, Caroline & Friends is hosted by Caroline Rhea and showcases “the most hilarious and adorable videos from around the web.”

Read more details from GSN below:

NEW YORK – (March 26, 2018) – GSN, the leader in game shows and competitive entertainment, announced today its new programming and other initiatives, as part of the network’s 2018 Upfronts, with a focus on its core audience with two new strip programs and a series of specials. GSN has greenlit two new strip series, AMERICA SAYS (Working Title) and CAROLINE & FRIENDS (Working Title), hosted by actor, comedian Caroline Rhea (“Sabrina The Teenage Witch”). The network’s other new addition COVER STORY, which launched in January 2018, has been picked up following its successful debut. Freshman hit, SNAP DECISION, hosted by David Alan Grier (“The Carmichael Show”) returns for a second season.

The announcement of new programming follows yet another strong year for GSN, which saw the network adding more than 16 million new viewers to its air*. Additionally, the popularity of the network’s programming continues to be reflected on its social media platforms, with GSN enjoying a 66% increase in social engagements on Facebook over the previous year.**

“GSN is the home for engaging game show programming that attracts high value consumers looking for a family environment filled with winning and fun,” said Fran Shea, executive vice president, programming and marketing for GSN. “Developing and producing new strip programming provides our loyal audience with a viewing destination they’ve come to expect and feel comfortable with, as GSN is an essential part of their daily routine.”

“Our audience is a group of prolific consumers. The insights we have harvested on their behaviors and habits will help inform our clients’ investment on GSN,” added John Zaccario, executive vice president, ad sales for GSN. “The definition of premium is evolving and these insights, coupled with attribution data make the case for increased investment on GSN.”

AMERICA SAYS (wt) is an in-studio game where two teams of friends and family face off to match survey responses with fill in the blanks that cover every topic under the sun. They’ll have to be quick when trying to think of what America says, as time is always ticking and the team with the most money banked after three rounds will head to a bonus round to see if they can guess even more survey responses to win extra cash and prizes. The show is based on a format by Entertainment One. Tara Long and Mark Herwick of Entertainment One (eOne) and Dave Noll and Cleve Keller of Keller/Noll serve as producers. Host to be announced at a later date.

Hosted by actor and comedian Caroline Rhea (“Sabrina The Teenage Witch”), CAROLINE & FRIENDS (wt), is a comedic, family-friendly series showcasing the most hilarious and adorable videos from around the web. As our comedic host guides the audience through each animal, kid and funny viral video, she’ll provide lighthearted conversation and commentary with her two comedic, celebrity friends. Caroline and her companions then nominate their favorites and ultimately pick the ‘best in show’, earning the family who submitted the video a special prize. The show is produced by Vin Di Bona of Fishbowl Worldwide Media. Rob Katz also serves as executive producer.

COVER STORY, a one-hour documentary series of specials, looks at the fascinating personalities, memorable moments and outrageous scandals in and around the most popular games shows of all time. Each episode seeks to reveal the true story with behind-the-scenes footage, in-depth, never-before-seen interviews and updates on where they are now as well as the dramas that touched the lives of stars, challengers, winners, contestants and characters involved in the long history of game play on television and beyond. COVER STORY is produced by Brent Zacky and Michael Spierer of Ashley Oaks Media.

Among the shows returning to GSN with new seasons in 2018 are the part game show, part social experiment DIVIDED, hosted by Emmy(R) Award winning executive producer Mike Richards (“The Price is Right,” “Let’s Make A Deal”) and the numerical fact stacking game show WINSANITY, hosted by Donald Faison (“Scrubs”). Returning this spring, season two of DIVIDED is produced by Talpa Media USA, Inc. for GSN. Executive producers are John de Mol and Jay Bienstock of Talpa and Michael Canter. WINSANITY, also returning this spring, will feature a new format, with a new look and double the game play, now allowing two players to face off in a head-to-head battle to rank compelling and surprising facts in numerical order. WINSANITY is produced by Electus for GSN. The series is executive produced by Electus CEO Chris Grant as well as Michael Canter (“Divided”) and Jeff Krask. Returning later this year, SNAP DECISION, the comedic half-hour game show series hosted by actor and comedian David Alan Grier (“The Carmichael Show”) that puts preconceptions, first impressions, and gut instinct to the ultimate test. SNAP DECISION is co-produced by Tornante-Sinclair LLC and GSN. Executive producers are Scott St. John, Lauren Corrao and John Quinn.

CATCH MY BLUFF is a studio-based game show where contestants must make up fake answers to trivia questions, in the hopes that their fellow contestants will fall for their bluffs instead of picking the real answer. After three rounds, the top scorer will face a fast-paced end game to see if they can pick out the host’s bluffs to earn even more cash. CATCH MY BLUFF is produced by Game Show Enterprises, LLC and executive produced by Grant Taylor.

MOVIN’ MONEY is an ambush game show where unsuspecting riders on a pedal tavern, a bar powered by bicycles pedaled by the patrons, will end up playing bar trivia on wheels as they attempt to bank cash by answering trivia and hope not to be booted off the ride for too many incorrect answers. MOVIN’ MONEY is produced by Trevor O’Neil, Margaret Miller and Shannon Houchins for Hideout Pictures.

MALL MADNESS is a shopping spree game show set in the Mall of America where unsuspecting shoppers are given the opportunity to trade the points they win from answering shopping-related trivia questions into spendable cash! The show is produced by Dee Haslam, Rob Lundgren and Lori Stryer of RIVR Media.”

What do you think? Do you watch GSN? Which new series will you check out?

Now if they can dump wall to wall Steve Harvey, currently 10 hours a day.
No problem with the Feud, but there were other hosts, and Harvey is everywhere

I agree way too much of Steve Harvey getting really old