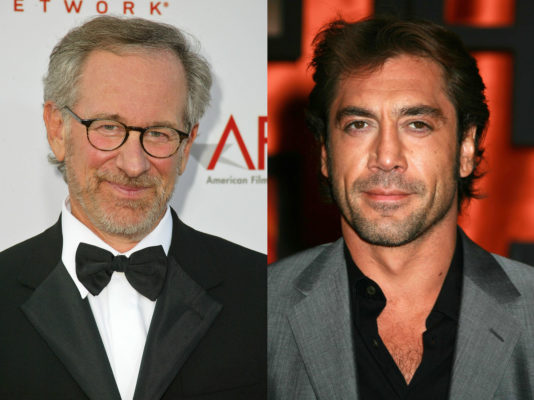 The historical drama will star Bardem as “the legendary conqueror, Hernan Cortes, who led a rebellious expedition to the heart of King Montezuma II’s Aztec empire, connecting two civilizations for the first time and changing the course of history.”

Steven Zaillian will write Cortes and executive produce alongside Spielberg, Bardem, Darryl Frank, and Justin Falvey. You can read more info from Amazon below:

SEATTLE–(BUSINESS WIRE)–Mar. 26, 2018– (NASDAQ: AMZN)— Amazon Studios today announced it has greenlit a straight-to-series order of a four-hour mini-series based on the epic saga of Hernan Cortes. The series, from three-time Academy Award-winner Steven Spielberg (Saving Private Ryan) and Amblin Television, is created for television and written by Academy Award-winner Steven Zaillian (Schindler’s List) and based on the screenplay by Dalton Trumbo (Roman Holiday). Emmy-winning Zaillian, Emmy-winning Darryl Frank (The Americans) and Emmy-nominated Justin Falvey (The Americans) are set to executive produce, and Academy Award-winner Javier Bardem (No Country for Old Men) is set to star and executive produce.

Cortes reveals the legendary conqueror, Hernan Cortes, who led a rebellious expedition to the heart of King Montezuma II’s Aztec empire, connecting two civilizations for the first time and changing the course of history.

“Cortes’ epic discoveries shaped the world as we know it today, and through the minds of Amblin, Steven Spielberg, Steve Zaillian and Javier Bardem, we will bring Prime Video members on an exhilarating journey,” said Sharon Yguado, Head of Scripted Series, Amazon Studios. “There are few moments in history that shape an entire culture such as Cortes’ story, and this series will be one filled with drama and adventure.”

“We are so pleased that Amazon has given us the opportunity to bring this exciting 500-year-old story to Prime Video members worldwide. It is a part of history that had such a significant impact and largely influenced modern day civilizations. With Javier as Cortes, we have the perfect star for this role, and we can’t wait to get started,” said Darryl Frank and Justin Falvey, co-heads of Amblin Television.

“It is a privilege to tell this epic story — one that is full of drama and conflict within this huge, historical spectacle where two distant civilizations clash at the height of their reign,” said Javier Bardem. “The best and worst of human nature came to life in all its light and darkness. As an actor, there is no better challenge than to serve such a unique project that I have been passionate about for years, and I am thrilled to be working with this dream team of Steven Spielberg, Steven Zaillian and Amazon.”

What do you think? Are you familiar with the story of Cortes? Will you watch the Amazon mini-series?

Awesome! We love historical based series! Will be looking for it.