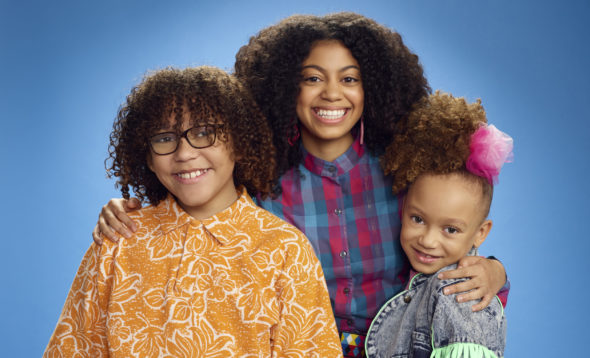 Were things better in the ’90s? Has the Mixed-ish TV show been cancelled or renewed for a third season on ABC? The television vulture is watching all the latest cancellation and renewal news, so this page is the place to track the status of Mixed-ish, season three. Bookmark it, or subscribe for the latest updates. Remember, the television vulture is watching your shows. Are you?

Airing on the ABC television network, the Mixed-ish TV show stars Mark-Paul Gosselaar, Tika Sumpter, Christina Anthony, Arica Himmel, Ethan William Childress, Mykal-Michelle Harris, Gary Cole, and Tracee Ellis Ross (narrator). In this prequel spin-off series, Rainbow “Bow” Johnson (Ross) from Black-ish recounts her experiences of growing up in a mixed-race family in the 1980s. Bow’s parents, Paul (Gosselaar) and Alicia (Sumpter), decided to move from a hippie commune to the suburbs so that they could better provide for their family. As her parents struggle with the challenges of their new lives in a more typical community, young Bow (Himmel) and her siblings, Santamonica (Harris) and Johan (Childress), navigate a mainstream school in which they’re perceived as neither black nor white. This family’s experiences illuminate the challenges of finding one’s own identity when the rest of the world can’t decide where you belong.

The second season of Mixed-ish averaged a 0.39 rating in the 18-49 demographic and 1.93 million viewers. Compared to season one, that’s down by 40% in the demo and down by 36% in viewership. Find out how Mixed-ish stacks up against other ABC TV shows.

Will ABC cancel or renew Mixed-ish for season three? The network has been having a tough time establishing new comedies and, though the ratings for this one could be much better, it is connected to two other shows — Black-ish (ABC) and Grown-ish (Freeform). I think that will be enough to land Mixed-ish a renewal but this sitcom is on shaky ground. I’ll update this page with breaking developments. Subscribe for free alerts on Mixed-ish cancellation or renewal news.

What do you think? Were you hoping that the Mixed-ish TV show would be renewed for a third season? Are you sorry that ABC cancelled this TV series, instead?