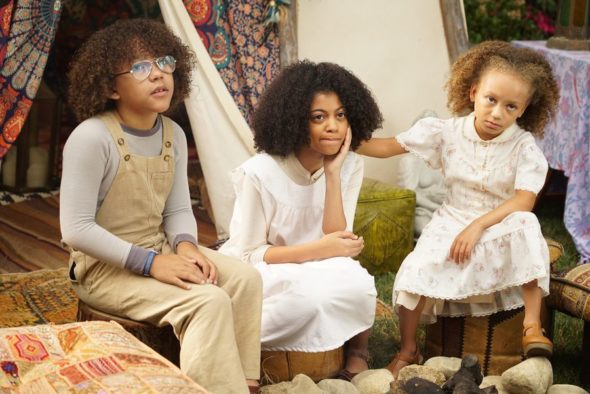 Are you ready to go back in time for the first season of the Mixed-ish TV show on ABC? As we all know, the Nielsen ratings typically play a big role in determining whether a TV show like Mixed-ish is cancelled or renewed for season two. Unfortunately, most of us do not live in Nielsen households. Because many viewers feel frustration when their viewing habits and opinions aren’t considered, we’d like to offer you the chance to rate all of the season one episodes of Mixed-ish here. *Status update below.

An ABC family comedy, the Mixed-ish TV show stars Mark-Paul Gosselaar, Tika Sumpter, Christina Anthony, Arica Himmel, Ethan William Childress, Mykal-Michelle Harris, Gary Cole, and Tracee Ellis Ross (narrator). It centers around Rainbow “Bow” Johnson (Ross) recounting her experience of growing up in a mixed-race family in the 1980s. Bow’s parents, Paul (Gosselaar) and Alicia (Sumpter), decided to move from a hippie commune to the suburbs so that they could better provide for their family. As her parents struggle with the challenges of their new lives in a more typical community, young Bow (Himmel) and her siblings, Santamonica (Harris) and Johan (Childress), navigate a mainstream school in which they’re perceived as neither black nor white. This family’s experiences illuminate the challenges of finding one’s own identity when the rest of the world can’t decide where you belong.

What do you think? Which season one episodes of the Mixed-ish TV series do you rate as wonderful, terrible, or somewhere between? Should ABC cancel or renew Mixed-ish for a second season? Don’t forget to vote, and share your thoughts, below.

The first episode was promising but fell off my radar. There are better shows.

I like this show because I’m learning things but it is a bit too preachy in how the topics are presented. Santa Monica is so over the top that she is obnoxious. I know she is supposed to be obnoxios but it is a putoff to watch. It feels like one of those 70s after school specials. They were too preachy also.

Loved this show! Every time I heard that line “I wanna be an idiot so bad!” In the commercials I couldn’t wait to see it. Funny!