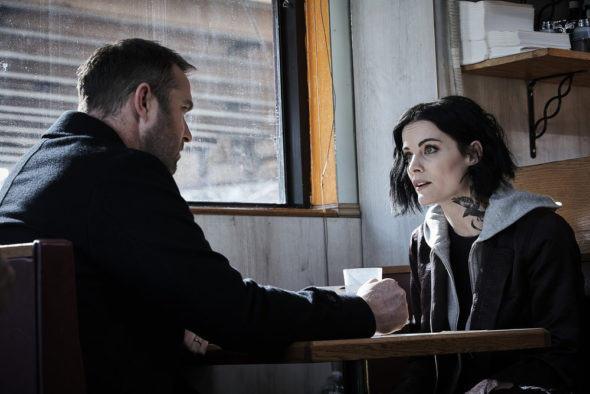 Blindspot just aired it series finale, so what’s next? Recently, creator Martin Gero spoke with Deadline about ending the NBC TV show and a possible spin-off.

The thriller centers on Jane Doe (Jaimie Alexander), an amnesiac who is found in Times Square covered in mysterious tattoos. FBI Agent Kurt Weller (Sullivan Stapleton) and his team work to decipher her intricate tattoos. Despite a web of conspiracy and corruption, they begin to uncover clues, as well as Jane’s identity. The cast also includes Rob Brown, Audrey Esparza, Ashley Johnson, Ennis Esmer, and Mary Elizabeth Mastrantonio.

I’d be super open to it. I mean, Audrey is part of the…she’s a star I think since the beginning, and if anyone wants to do a Zapata P.I. spinoff, they know where to find me. I’d love to do it.”

No, I mean, for us, you know, Madeline –Mary Elizabeth Mastrantonio is, like, such a beast. She is such a dominant presence and power in the show and you know, had been a two-season bad guy. So, we really needed to give her a proper ending, and we felt like we wanted the last episode to be more focused on the team, and we couldn’t do that if we were trying to take down the main bad guy of the last two years. So, getting our big boss down earlier allowed us to have the space to have a celebration of, you know, this weird kind of look-back at Blindspot in this final episode.”

As for the ending, Gero says the creative team always wanted the NBCseries to return to Times Square:

Well, you know, there’s something beautiful. We did this graphic in the opening of the episode where it starts with, you know, 100, and the 100 turns around to 001. For us, we really love the roundness of storytelling, you know? Like, we liked that the beginning feels like the end, the end feels like the beginning. So, that image was always kind of in our minds, that there would probably be a body bag in Times Square — but it’s not the last image. It’s the penultimate image, right? It’s kind of a choose-your-own-adventure where the story ends. Does it end in the penultimate shot, or does it end in the final shot?”

What do you think? Are you a fan of Blindspot? Would you watch a spin-off series?

Would love a spin-off with Patterson and Rich.com. Treasure Hunter /ancient mysteries/any hard puzzle solving type cases. Patterson and Rich characters are great together on screen. She is a little strait laced, and he is a little kinky. I liked the humour brought to the episodes by R.com. Using the black web contacts ie: Ice Cream would bring the whole Indianna Jones theme into the present day. In the last episode when P and R discussed them being a team, I thought it was a hint at a spin off.I really like the idea.

YES I would love to see a spinoff and another series of this show. I loved all the actors that played in blind spot, AWESOME show.

Absolutely ! Love all the main characters

Yes, definitely. I would want Blind Spot to continue for another season. I enjoyed this last season the best.

One of the absolutely best series ever—strong cast and outstanding plot line—would certainly watch a spinoff. Bring back the cast!!

One of the top shows that aired the past 5 years! Would love a spinoff of any kind. These characters were great and the actors did amazing portraying them. Will miss this one for sure. One of my top 5 favorite shows of all time!

Please have a spin-off.

Please bring back something as good. This was a great series

I would love to see a spin off of the show with all the main characters involved somehow or just bring the show back .The ending still left me with questions..

Yes to spin off if we can’t have the real thing!