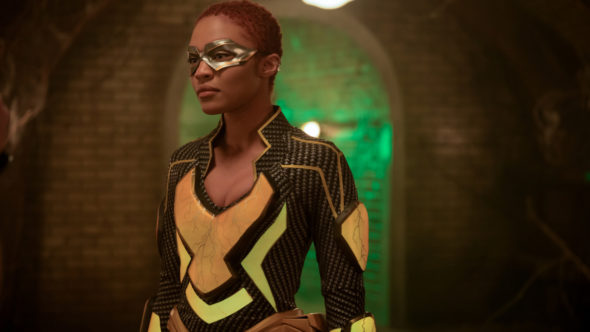 Black Lightning has ended after four seasons on The CW, and the creator of the series, Salim Akil, has spoken about the ending of the show. He also discussed with Deadline what could have happened if Black Lightning had continued for a fifth season.

Akil said the following about ending The CW series:

“It was a combination of events, I think. With Covid and the rules and regulations around that, we had written about 11 scripts, and then had to go back and rewrite them for several reasons. So, we found ourselves in a beautiful creative space, and we actually found the ending. We had one ending set up, but we had to find another one [due to the pandemic]. But I’m pretty pleased with the ending that we have.”

The CW passed on a potential Painkiller spin-off, but other spin-offs are possible. Akil said the following:

For now, fans of Black Lightning must say goodbye to the series and its characters, but it is always possible that viewers could see them return at some point.

Star Cress Williams recently said, “I have had people from The Flash reach out, asking if I’d come do some work with them.” It’s been confirmed that The Flash will kick off its eighth season with a five-episode “crossover-type” event which will feature characters from across the Arrowverse.

What do you think? Are you a fan of Black Lightning on The CW? Would you watch a spin-off?

This show had all the typical CW problems, insert race bait topics and all that, but it was still decent. THE MAIN problem is that its a bait and switch, like hawkeye was. This isnt a BL show, this shows about the women around him, hes a guest. sick of it. This could work with good writers, these people, not good writers. Stop shoving race down our throat, we get it already. Just make some good shows, we dont need the race stuff 24/7

We want painkiller spin off or nothing…

I am heart broken. I thought black lightning was coming back on, to find out that they have ended the show. I was happy to see a super hero who like me as the star of show. Also my son loves the show as well. I really hope they reconsider coming back out with a new season. I really wasn’t satisfied with the ending either.

Should have been nominated for an Emmy. The music, characters, creativity and colorized format and comic like presentation was phenomenal. Best series I’ve seen in awhile. I’m saddened it’s gone. Would love to see it return or a spin-off. Loved it!

I would love to see a spin off or continuation of Black Lightning. There aren’t enough of these caliber of programs featuring such a diverse and inclusive cast, team, and storylines.

I would have appreciated a Painkiller if just to see hiw the romance with Lighting ended.

I would love to see Painkiller & the other characters have an spin off ☺ I loved this show soo much. Jordan Galloway was soo good playing Painkiller. China Anne McClain was good with playing Lightning. This show deserve a spinoff I hope it does. The characters were everything.

I live the series but I think you got poor ratings because all of the black women (Jefferson’s daughters and his wife) were total uncaring ******* to their father and husband. That is the only part of the show I hated. Black children do not talk back to their parents that way and the majority of black wives are more understanding.

I agree how is The Flash still around no where as good Black lightning.

I agree, I love the flash but I’m wondering how did they show get picked up for a new season

I love Black Lighting I hate to see it go. I would a spin off with Pain killer included I think this woul d be great.