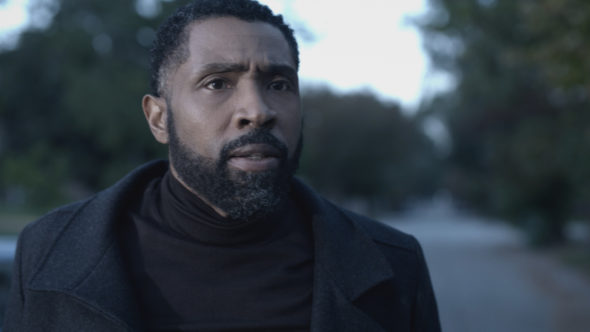 How will the Pierce family’s story end? Has the Black Lightning TV show been cancelled or renewed for a fifth season on The CW? The television vulture is watching all the latest cancellation and renewal news, so this page is the place to track the status of Black Lightning, season five. Bookmark it, or subscribe for the latest updates. Remember, the television vulture is watching your shows. Are you?

Airing on The CW television network, the Black Lightning TV show is based on DC Comics characters and stars Cress Williams, China Anne McClain, Nafessa Williams, Marvin “Krondon” Jones III, Christine Adams, Jordan Calloway, James Remar, and Chantal Thuy. In the series, Jefferson Pierce (Williams) is a former Olympic athlete, a respected educator, and a family man. He’s also Black Lightning, the superpowered protector of the city of Freeland who has the ability to sense and harness electricity. His daughters Anissa (Williams) and Jennifer (McClain) also have powers and superhero personas of their own. Lynn Stewart (Adams) is Jefferson’s ex-wife and an expert in metahuman medicine and they are still very much in love. Together, the Pierce family faces the challenges of a declined urban community, including infamous gangster, Tobias Whale (Jones III), and a menacing gang that calls itself The 100. Fortunately, the family has allies in their fight, Jefferson’s surrogate father and a former covert superspy, Peter Gambi (Remar).

The fourth season of Black Lightning averaged a 0.12 rating in the 18-49 demographic and 406,000 viewers. Compared to season three, that’s down by 47% in the demo and down by 38% in viewership. Find out how Black Lightning stacks up against other The CW TV shows.

We don’t have to wonder if The CW cancel or renew Black Lightning this time around. The network has already announced that season four is the end. Could something change? I’ll update this page with breaking developments. Subscribe for free alerts on Black Lightning cancellation or renewal news.

What do you think? Were you hoping that that the Black Lightning TV show would be renewed for a fifth season? Are you sorry that The CW is ending this TV series?

Here’s a petition to sign up on.
https://www.change.org/p/cw-save-black-lightning
Let me know if you’ve done it, OK?

This was one of the CW’s better shows, regardless of the demographic….and so called ratings. The CW is almost to the point where the channel is going to leave my favorites list…..