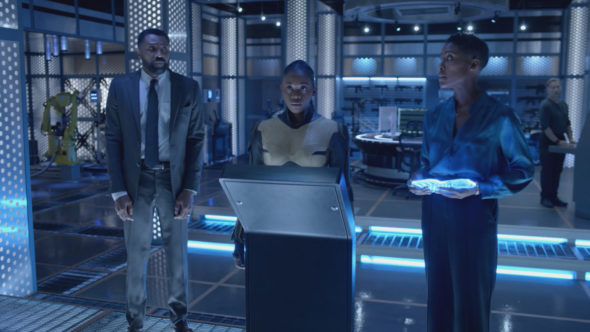 Will the Pierce family all survive until the end of the fourth season of the Black Lightning TV show on The CW? As we all know, the Nielsen ratings typically play a big role in determining whether a TV show like Black Lightning is cancelled or renewed for season five (in this case, we know it’s ending). Unfortunately, most of us do not live in Nielsen households. Because many viewers feel frustration when their viewing habits and opinions aren’t considered, we invite you to rate all of the fourth season episodes of Black Lightning here.

A CW action superhero series, the Black Lightning TV show is based on DC Comics characters and stars Cress Williams, China Anne McClain, Nafessa Williams, Marvin “Krondon” Jones III, Christine Adams, Jordan Calloway, James Remar, and Chantal Thuy. In the series, Jefferson Pierce (Williams) is a former Olympic athlete, a respected educator, and a family man. He’s also Black Lightning, the superpowered protector of the city of Freeland who has the ability to sense and harness electricity. His daughters Anissa (Williams) and Jennifer (McClain) also have powers and superhero personas of their own. Lynn Stewart (Adams) is Jefferson’s ex-wife and an expert in metahuman medicine and they are still very much in love. Together, the Pierce family faces the challenges of a declined urban community, including infamous gangster, Tobias Whale (Jones III), and a menacing gang that calls itself The 100. Fortunately, the family has allies in their fight, Jefferson’s surrogate father and a former covert superspy, Peter Gambi (Remar).

What do you think? Which season four episodes of the Black Lightning TV series do you rate as wonderful, terrible, or somewhere between? Do you think that Black Lightning should have been renewed for a fifth season on The CW? Don’t forget to vote, and share your thoughts, below.

I didn’t even know it came back!? Like zero promotion for the show. BL is not only one of the few non-stereotypical black shows, but it’s a show featuring an awesome BLACK comic character as the star. Not a sidekick like Vixen or Jax on Legends or Dingle on Arrow but a show about a black comic character. We also lost Cloak and Dagger, which starred a black character, Cloak, who is also black in the comics. This show spoke to me because I could relate to it and I wish, growing up, that we had BL, BP, Vixen etc… Read more »

Black Lightning should not end!!

I really agree, It should not end. I has a really good storyline.