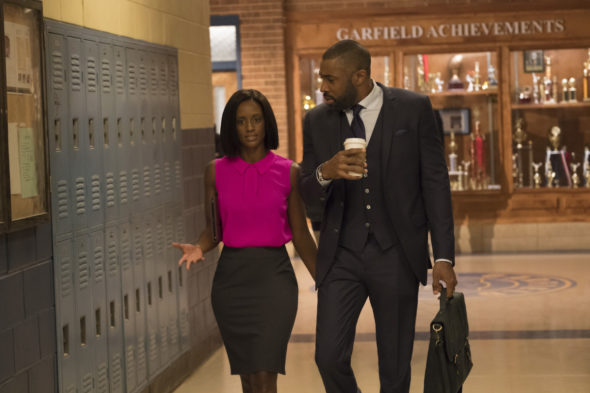 Do you get a charge out of the first season of the Black Lightning TV show on The CW? As we all know, the Nielsen ratings typically play a big role in determining whether a TV show like Black Lightning is cancelled or renewed for season two. Unfortunately, most of us do not live in Nielsen households. Because many viewers feel frustration when their viewing habits and opinions aren’t considered, we’d like to offer you the chance to rate all of the Black Lightning season one episodes, below.

A CW superhero drama, Black Lightning stars Cress Williams, Nafessa Williams, China Anne McClain, James Remar, Damon Gupton, Christine Adams, and Marvin Jones III. The DC Comics-inspired series centers on Jefferson Pierce (Cress Williams). While he once waged a vigilante war against crime — using the masked persona “Black Lightning” — Pierce retired years ago and now serves as the principal of a charter high school. Crime and corruption are running amok, now that The One Hundred — a dangerous gang — has the city in its grasp. Endowed with the amazing ability to harness and control electricity, Black Lightning jumps back into action. Now the community stands a fighting chance, but at what cost to his family?

What do you think? Which season one episodes of the Black Lightning TV series do you rate as wonderful, terrible, or somewhere between? Should The CW cancel or renew Black Lightning for a second season? Don’t forget to vote, and share your thoughts, below.

Great show!! I learned about it after the season was over and watched on Netflix. In one and a half days! It was that good!! A lot of twist and turns from episode one to season finale. My favorite (of many) is when Jennifer told her parents that she was having sex Saturday but will be home by curfew!! Lordt, I thought dad was gonna choke a wisdom tooth…a serious topic hilariously written! And to see my favorite news anchor (Amanda Davis) made it even special for me RIP Amanda Davis. Writers/Producers kudos for a job well done. Season 2,… Read more »

i LOVE THIS SHOW SEASON TWO IS A MUST IN MY HOUSEHOLD! BLACK LIGHTNING IS THE BEST NEW SHOW ON THE CW NETWORK !

The actors all have great credibility and deep stage presence which is rare. I am drawn to the fairly predictable story line of comic heroes as a genre somewhat; but this show does it all well.

This is an awesome show.

Black lightning should be renewed. It is a positive show.

Black Lightning is a great show and should be renewed. Give the show a chance for ratings as good as the Flash.

I think the actor is wonderful for the part of black lightning.

I loved the 1st episode can”t wait to see the next one. Love the plot and characters.

My kids and I love this show. I have teenagers so I feel that this is a show for me to enjoy as well as its entertaining and informative for the kids.

Great start for a new show!