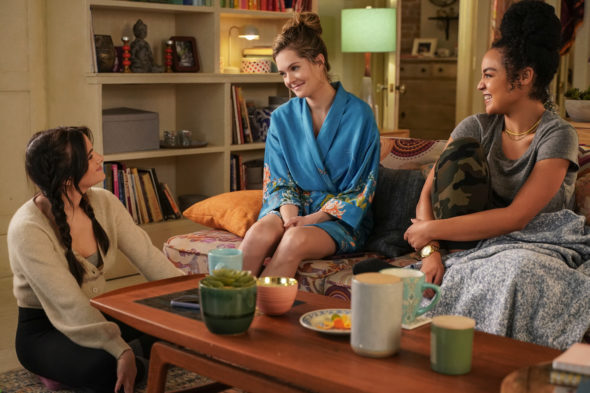 What will become of Kat, Jane, and Sutton in the fifth season of The Bold Type TV show on Freeform? As we all know, the Nielsen ratings typically play a big role in determining whether a TV show like The Bold Type is cancelled or renewed for season six (in this case, we know season five is the end). Unfortunately, most of us do not live in Nielsen households. Because many viewers feel frustrated when their viewing habits and opinions aren’t considered, we invite you to rate all of the fifth season episodes of The Bold Type here.

A Freeform comedy-drama series, The Bold Type stars Katie Stevens, Aisha Dee, Meghann Fahy, Stephen Conrad Moore, and Melora Hardin with Nikohl Boosheri recurring. The show reveals a glimpse into the outrageous lives and loves of those responsible for Scarlet, the global women’s magazine. The rising generation of Scarlet women leans on one another as they find their own voices in a sea of intimidating leaders. Together they explore sexuality, identity, love, and fashion. After five empowering seasons, our trio is on the brink of defining who they really are and how best to leave their mark on the world. Their futures are bright, and their love and support for each other will never change.

What do you think? Which season five episodes of The Bold Type TV series do you rate as wonderful, terrible, or somewhere between? Do you think that The Bold Type should be cancelled or renewed for a sixth season on Freeform? Don’t forget to vote, and share your thoughts, below.

Why are they canceling. I love love love this show. They are also canceling Younger…..all my shows!!! Damn

I love The Bold Type and was very disappointed that it was cancelled. wish they could take back their decision and keep it for another season.