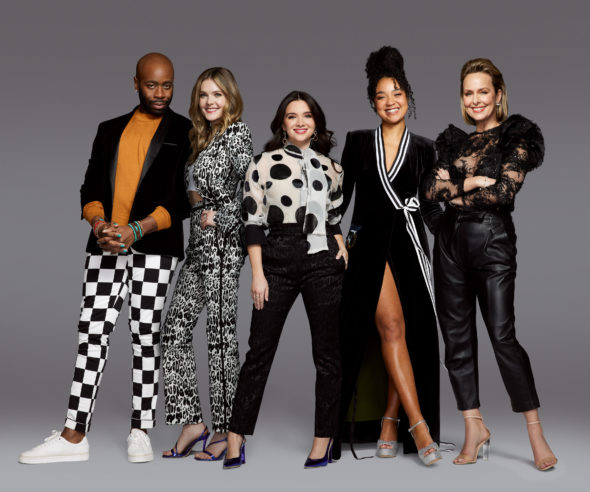 Where will Kat, Jane, and Sutton end up? Has The Bold Type TV show been cancelled or renewed for a sixth season on Freeform? The television vulture is watching all the latest cancellation and renewal news, so this page is the place to track the status of The Bold Type, season six. Bookmark it, or subscribe for the latest updates. Remember, the television vulture is watching your shows. Are you?

Airing on the Freeform cable channel, The Bold Type stars Katie Stevens, Aisha Dee, Meghann Fahy, Stephen Conrad Moore, and Melora Hardin with Nikohl Boosheri recurring. The show reveals a glimpse into the outrageous lives and loves of those responsible for Scarlet, the global women’s magazine. The rising generation of Scarlet women leans on one another as they find their own voices in a sea of intimidating leaders. Together they explore sexuality, identity, love, and fashion. After five empowering seasons, our trio is on the brink of defining who they really are and how best to leave their mark on the world. Their futures are bright, and their love and support for each other will never change.

The fifth season of The Bold Type averaged a 0.06 rating in the 18-49 demographic and 1.72 million viewers. Compared to season four, that’s even in the demo and up by 6% in viewership in the live+same day ratings (including DVR playback through 3:00 AM). While these numbers don’t include further delayed or streaming viewing, they are a very good indicator of how a show is performing, especially when compared to others on the same channel. There can be other economic factors involved in a show’s fate, but typically the higher-rated series are renewed and the lower-rated ones are cancelled. Find out how The Bold Type stacks up against other Freeform TV shows.

We don’t have to wonder if Freeform will cancel or renew The Bold Type this time around. The channel has already announced that’s season five is the end.  Could it be revived someday? Subscribe for free alerts on The Bold Type cancellation or renewal news.

What do you think? Do you wish that The Bold Type TV show had been renewed for a sixth season? Would you have watched more of this Freeform show?