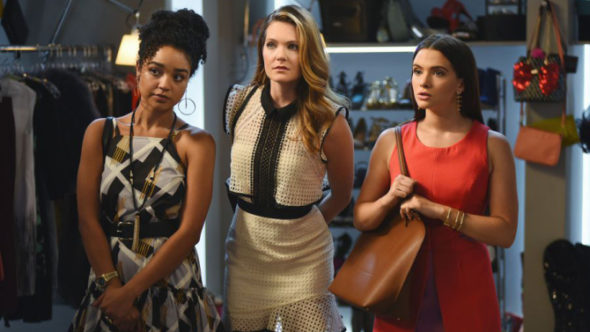 The Bold Type just finished its first season last night, but what about a second? Recently, creator Sarah Watson spoke with TVGuide about the future of the Freeform TV show.

Speaking to TVGuide, Watson said The Bold Type has not yet been renewed for a second season but she’s hoping:

No renewal plans yet… Obviously there’s things percolating in my mind, and God-willing we get a Season 2, but right now my focus is to lay around and do nothing and clean out my closet.”

Are there any plans if Freeform does renew the series? Watson revealed she has one in mind:

I jokingly said the one storyline I wanted to tell was office buildings being really cold because of men. Apparently office temperatures are always catered to men, so in Season 2, I would like to see them take on the Steinem Publishing Company about that. That’s about the extent of the storylines I’ve got planned.”

What do you think? Have you seen The Bold Type? Would you watch a second season?

Any word yet on Season Two of Bold Type ? Anxiously waiting?

Definitely, I want a season two

I would absolutely love to see a second season! This show is smart, sexy and so deep and simple and woulderful!

I looked forward to every episode and would LOVE a Season 2!

I love this show and can’t wait for season 2!!!

I would love a second season…this show is awesome!!

I absolutely loved the bold type!! Excellent portrayal of how friendships should be. Hoping for a season two

I loved The Bold Type. It was fun, fast paced and had lots of good story lines. I really, really hope it’s renewed for a second season.