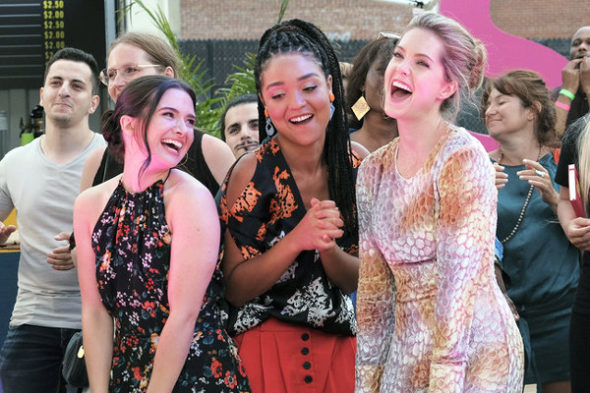 Freeform has made a bold decision. The network just announced they’ve renewed The Bold Type for a fourth season.

The drama series is set at the offices of Scarlet, a women’s magazine, and follows the newest generation of “Scarlet women” — Jane (Katie Stevens), Kat (Aisha Dee), and Sutton (Meghann Fahy) — as they make their marks on the industry. The cast also includes Matt Ward, Sam Page, Melora Hardin, Stephen Conrad, and Nikohl Boosheri.

Although ratings for The Bold Type have declined during the show’s third season, the Freeform series remains a hit with fans and critics. So far, season three is averaging a .09 rating in the 18-49 demo and 212,000 viewers. Compared to season two, that’s a near 40% drop in the ratings and a 30% drop in viewership.

Nevertheless, Freeform is all on board for The Bold Type. Read more about the renewal below:

Freeform announced today, as part of the Walt Disney Television Upfronts presentation, that it has picked up a fourth season of the brand-defining series “The Bold Type.” Series stars Katie Stevens, Aisha Dee and Meghann Fahy celebrated with a toast of rosé while making the announcement today in New York. The topical dramedy will continue to highlight the real-world issues faced by the employees of Scarlet Magazine.

While on stage at Lincoln Center’s David Geffen Hall, Aisha Dee, Meghann Fahy, and Katie Stevens said, “On ‘The Bold Type,’ we play characters who are determined to succeed in the New York fashion media business. We balance careers, friendship and love on the daily. But this show is so important to us and our fans because regardless of who you are, we are all just trying to navigate the mess of our lives. And we are so excited to be coming back for season 4! Here’s to more bold stories, friendship and a whole lot of rosé.”

The series also stars Melora Hardin, Sam Page, Matt Ward and Stephen Conrad Moore. For the upcoming season, Amanda Lasher passes the showrunner baton to Wendy Straker Hauser, who has been with the series since its first season. Matt McGuinness, David Bernad, Ruben Fleischer and Joanna Coles also serve as executive producers. “The Bold Type” is produced by Universal Television in association with Freeform and The District.”

What do you think? Do you watch The Bold Type? Will you watch the next season?

Yes, am waiting to see season 4.

Yes I am excited for season 4. One of my favorite.

Love it so happy

Just discovered this series and finished 2 seasons – working on the 3rd. I am not the age you market to (76) but absolutely love it. Love the topics, the diversity, etc. And I love the actors!

Me either, but just love this show…