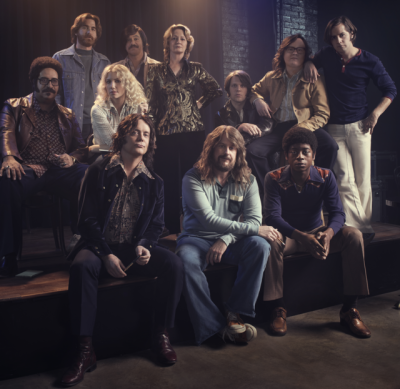 I’m Dying Up Here will not arrive until May, but there is new news about the series. Brad Garrett has been cast to appear in a recurring role.

Showtime revealed the following about Garrett’s casting in a press release. Check that out below.

“Emmy-winning actor and comedian Brad Garrett (Everybody Loves Raymond) will guest star in the SHOWTIME drama series I’M DYING UP HERE in a season-long arc. Garrett will play comedy legend Roy Martin, who arrives on the scene at Goldie’s and drops bombs and wisdom on the club’s comics. Goldie (Melissa Leo) lures him into a business partnership as she schemes to expand her empire. Created and executive produced by Dave Flebotte and executive produced by Golden Globe(R) winner Jim Carrey and Michael Aguilar, the fictional I’M DYING UP HERE explores L.A.’s famed ’70s stand-up comedy scene. The second season will premiere on Sunday, May 6 at 10 p.m. ET/PT.

Garrett has won three Emmys and a Screen Actors Guild(R) Award for his role on the iconic comedy series Everybody Loves Raymond. He was also nominated for an Emmy and SAG Award for his portrayal of “The Great One,” Jackie Gleason, in the television film Gleason, and recently appeared on This Is Us, Law & Order: SVU and Fargo. Garrett’s feature film credits include Not Fade Away, Music and Lyrics and Suicide Kings, and his trademark voice has been heard in more than 30 animated films, including the contemporary classics Finding Nemo, Ratatouille and Tangled. He will also be heard as the voice of Eeyore in Disney’s upcoming live-action feature Christopher Robin and will co-star with Julianne Moore and John Turturro in Sebastian Lelio’s Gloria.

I’M DYING UP HERE delves into the inspired, damaged and complicated psyches of a fictional group of competitive but close-knit comedians mentored by Goldie, a brassy comedy club owner who rules over her business with an iron fist, but nurtures her comedians with tough love. The series takes viewers behind the curtain of the comedy scene that birthed the careers of legends such as Richard Pryor, Robin Williams and David Letterman, showing there’s truly no such thing as an easy laugh. The ensemble cast includes Academy Award winner Melissa Leo, Ari Graynor, Clark Duke, Michael Angarano, RJ Cyler, Andrew Santino, Erik Griffin, Al Madrigal and Jake Lacy. Produced by SHOWTIME, I’M DYING UP HERE is based on the non-fiction book of the same name by William Knoedelseder. The 10-episode second season goes into production this month in Los Angeles. Flebotte, Carrey, Aguilar, Christina Wayne (Assembly Entertainment), Cindy Chupack, Adam Davidson and Endemol Shine Studios serve as executive producers on season two.

Are you excited for the return of I’m Dying Up Here? Tell us what you think.