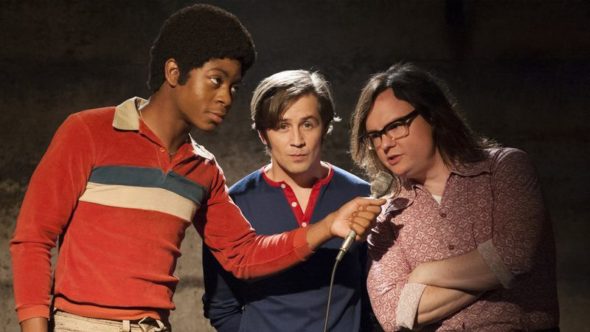 Showtime is ready for another set. Deadline reports the network has renewed the TV show I’m Dying Up Here for a second season.

The renewal comes as a bit of a surprise since I’m Dying Up Here earned pretty low ratings. Over the course of its first season, the Showtime drama averaged a .04 rating int he 18-49 demo and only 143,000 viewers, making it one of the network’s lowest-rated series for the 2016-2017 season.

However, it seems like Showtime sees some promise for I’m Dying Up Here. They’ve ordered 10 episodes for season two, which is slated to debut in 2018.

It is gratifying that so many comedians tell us this series really nailed the comedy club experience. The talented ensemble of I’m Dying Up Here, led by the brilliant Melissa Leo, and an equally skilled creative team behind the scenes, tell stories that scale the heights of comedy and the depths of drama, often at the same time. Having heard their plans for season two, I’m excited about the journeys these characters will take and the new ground the show will break.”

What do you think? Have you seen I’m Dying Up Here? Will you watch season two?

“I’m Dying Up Here”, I’m so excited it’s been renewed. So looking forward to season 2. Hope I don’t have to wait much longer. I love all the actors they make it so real like I’m right there. Thank you Jim Carey Fantastic job love it

I LOVE this show. Best on TV. PLEASE keep it going. Characters are realistic, Era is wonderful with great music and cars and old tidbits of history. Makes me wish I would have pursued comedy…….it is the old adage…..no pain, no gain.

This is really great that this show will go on. This series is very human: about humans and for humans. About their real lives and real feelings and their own ways, shelled from other alien opinions, based on general consensus. Thank you all the team of creators and the channel for letting this show to be born and be watched. This is awesome!

I am beyond THRILLED that I’m Dying Up Here has been renewed !! Thank-you Showtime, for realizing how great this show is, and respecting it enough to let it keep going.

I’ve watched every episode of this authentic & fabulous series. Color me deliriously HAPPY that savvy executives @ Showtime are bringing this Program back to the huddled masses. Those of us who are blessed to personally witness Stand Up Comedy often appreciate the history, hard work and soul-baring insight of these courageous souls. The writers of this series are to be commended for their gifted material. Additionally, I’m in awe of the stellar craftsmanship I’ve witnessed week to week in the Actor’s extraordinary performances. Thank you Showtime for reminding us that there’s still professionalism found in the world and we… Read more »

I couldn’t have said it better !! I am THRILLED that I’m Dying Up Here has been renewed !!

Is it too wild that this news brings me tears of joy!?!? Am rejoicing today. IDUH, Shameless and Happyish are some of my all time favorite television content. It seems Showtime has blitzed the ball from HBO for intelligent and dimensional scripted shows (except for Insecure, which is gold for so many reasons). I’m Dying Up Here is easily one of the best shows I have ever given an hour of my time to. Thank goodness comedians spoke up, because if this didn’t get renewed, it would have been the equivalent to a life cut short = tragic. This is… Read more »