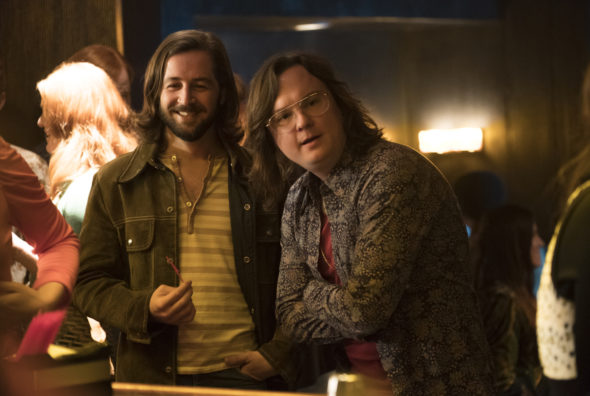 How lively is the second season of the I’m Dying Up Here TV show on Showtime? As we all know, the Nielsen ratings typically play a big role in determining whether a TV show like I’m Dying Up Here is cancelled or renewed for season three. Unfortunately, most of us do not live in Nielsen households. Because many viewers feel frustration when their viewing habits and opinions aren’t considered, we’d like to offer you the chance to rate all of the I’m Dying Up Here season two episodes here.

What do you think? Which second season episodes of the I’m Dying Up Here TV series do you rate as wonderful, terrible, or somewhere between? Should Showtime cancel or renew I’m Dying Up Here for a third season? Don’t forget to vote, and share your thoughts, below.

I just binged this whole series and was so disappointed when I found out that it was cancelled. The character development and story lines were phenomenal. I was pleasantly surprised with the acting as well. Such a great show with so much potential! Showtime should get rid of some of their other mediocre shows.

This is my favorite series!!! Please renew!

Do not cancel a show of this caliber. It’s mind-blowing when a quality show emerges and it’s threatened by being cancelled. It’s funny, sad, dramatic and totally entertaining.

PLEASE renew !!!!! Best show since The Sopranos and Madmen!!!

Picketing & Protesting if not renewed

This is a most excellent show!!!!! How could you Hollywood Turkeys gobble gobble, even think of canceling this show! There is so much more story to tell gosh damn it! Who makes these decisions anyway, because I would love to have a chat with them! If it’s just a couple of people making the decision to cancel or renew this show then that’s bogus!!! Myself, my friends and many people I know enjoy this show! Thank you for taking the time to read my thoughts……Side Note if you do decide to cancel this show, I will come to your office… Read more »

This show is phenomenal: the sense of time and place, interesting characters, great acting. Melissa Leo is outstanding. Please renew for season 3!

This is my new favorite series of all that are out there and I’m shocked by it’s lukewarm reception! From the cast, jokes, acting, writing, & all around look & feel of the show during that era, I’m of the belief that the creators, cast, and director nailed it! RENEW this show!

I agree this show damn well better get renewed!!! There is so much more to tell. It is a most excellent show!

My husband and I stumbled on this show midway during the 1st Season and immediately went back and rewatched it from the beginning. We were thrilled it was renewed for a 2nd Season. The 2nd Season has been phenomenal! Looking forward to the finale tonight and a 3rd Season please!!! Love this show….reason we have Showtime!

I love this show! It is brilliant! Acting is phenomenal! Perfectly casted!
Season 2 is even better! Please have Season 3!

BEST SHOW ON YEARS ! EARLY ROOTS OF COMEDY ON SUNSET STRIO. MELISSA LEO DESERVES AN EMMY☆ anyone attached is SUPERB ☆ Please renew for a 3rd season.