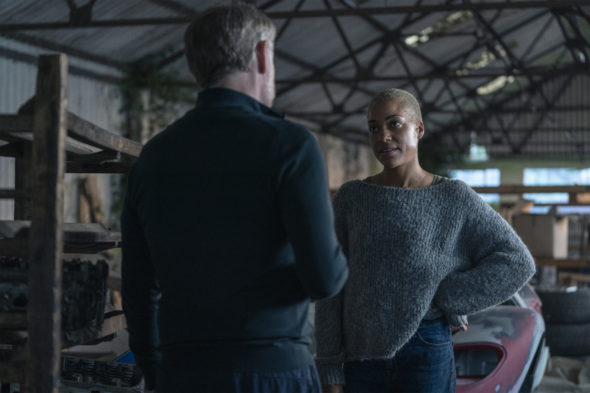 Who is responsible for Martie’s death? Has The Beast Must Die TV show been cancelled or renewed for a second season on AMC? The television vulture is watching all the latest cancellation and renewal news, so this page is the place to track the status of The Beast Must Die, season two. Bookmark it, or subscribe for the latest updates. Remember, the television vulture is watching your shows. Are you?

Airing on the AMC cable channel, The Beast Must Die TV show stars Jared Harris, Cush Jumbo, Geraldine James, Nathaniel Parker, Maeve Dermody, Douggie McMeekin, Mia Tomlinson, Barney Sayburn, and Billy Howle. After learning that the police investigation into the fatal hit and run of her young son Martie has been dropped, Frances Cairnes (Jumbo) takes matters into her own hands. Posing as a novelist researching a new murder mystery, Frances ingratiates herself with the family of George Rattery (Harris), the man she suspects is responsible, and sets a plan in action to kill him. She’s tracked by detective Nigel Strangeways (Howle), who has reason to believe his department covered up Rattery’s involvement in the incident.

The first season of The Beast Must Die averaged a 0.03 rating in the 18-49 demographic and 196,000 viewers in the live+same day ratings (including DVR playback through 3:00 AM). While these numbers don’t include further delayed or streaming viewing, they are a very good indicator of how a show is performing, especially when compared to others on the same channel. Other economic factors can be involved in a show’s fate, but the higher-rated series are renewed and the lower-rated ones are cancelled. Find out how The Beast Must Die stacks up against other AMC TV shows.

Will AMC cancel or renew The Beast Must Die for season two? The show is co-produced by BritBox in the UK (so it doesn’t cost AMC as much) and season two is already in development, with Strangeways working on a different case. I think the show will be renewed. I’ll update this page with breaking developments. Subscribe for free alerts on The Beast Must Die cancellation or renewal news.

What do you think? Do you hope that the Beast Must Die TV show will be renewed for a second season? How would you feel if AMC cancelled this TV series, instead?