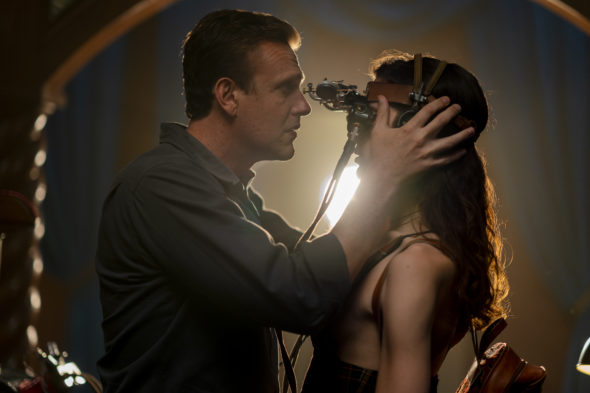 Can this show survive the harsh reality of ratings? Has the Dispatches from Elsewhere TV show been cancelled or renewed for a second season on AMC? The television vulture is watching all the latest cancellation and renewal news, so this page is the place to track the status of Dispatches from Elsewhere, season two. Bookmark it, or subscribe for the latest updates. Remember, the television vulture is watching your shows. Are you?

Airing on the AMC cable channel, the first season of Dispatches from Elsewhere stars Jason Segel, Sally Field, Richard E. Grant, André Benjamin, and Eve Lindley. The show revolves around four ordinary people who each feel that there’s something missing in their lives, but they can’t understand what it is. They are Fredwynn (Benjamin), an obsessive conspiracy theorist; a former homemaker named Janice (Field); Peter (Segal), a regular guy who’s looking for meaning; and Simone (Lindley), who struggles to belong and feel accepted. The diverse foursome is brought together by chance (or is it by design?) when they stumble onto a puzzle hiding just behind the veil of everyday life. Octavio Coleman (Grant) is the unique and forever elusive narrator who shares key details about our four main characters as he guides us all on this adventure.

Will AMC cancel or renew Dispatches from Elsewhere for season two? This show is designed to be an anthology series, likely with a different cast and story each time around. Though the ratings could be better, I think the series will be renewed. I’ll update this page with breaking developments. Subscribe for free alerts on Dispatches from Elsewhere cancellation or renewal news.

What do you think? Do you hope the Dispatches from Elsewhere TV show will be renewed for a second season? How would you feel if AMC cancelled this TV series, instead?

A truly unique show. I hope it will be renewed.

One of the Best shows EVER!

I would be disappointed if “ Dispatches from Elsewhere “ gets cancelled. I love the series! Extremely creative! Looking forward to season 2.

AMC can cancel “Dispatches from Elsewhere”. I tried to watch it, but I couldn’t get into it. And I gave it a fair try, I watched half the season. I just didn’t like it at all. So it can go !!!

One of the best series I’ve ever seen, the fact that it came from Jason Segel is very surprising. He said he has a secret plan for Season 2 if it gets renewed, so let’s let him tell this story amazing story. Renew Dispatches From Elsewhere for Season 2

Absolutely magical! Though slightly heavy on the morality play, there is SO MUCH HOPE expressed in this beautifully crafted and executed tale. More please, Sir.

Dispatches from elsewhere is one of the best shows in a long time. We need a season 2 I’m sure more people would watch if they can stream the first season

Really looking this series, don’t cancel it, send next season for us! Eve great job, you came out of the blue..

Dude. It’s only on the second episode. Kind of early to predict. I like it.

I love it so far.

Sorry, too weird for us. We made it through maybe the first 10 minutes. Zapped it & took it off my list to tape.

How can you judge a show on only 10 minutes. You do you, but I think you deprived yourselfs from something that could be amazing.

I for one thought this is one of the best shows I’ve seen in a long time.