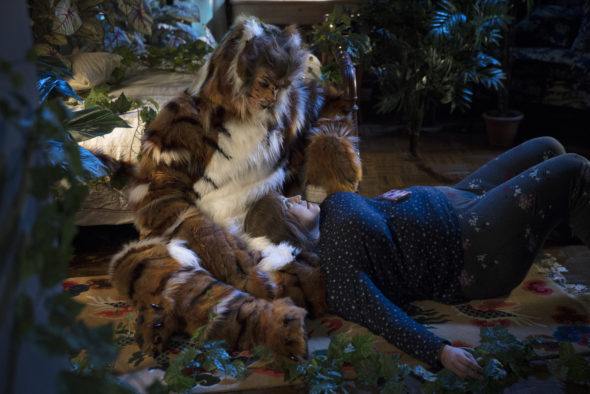 What has become of Plum Kettle? Has the Dietland TV show been cancelled or renewed for a second season on AMC? The television vulture is watching all the latest cancellation and renewal news, so this page is the place to track the status of Dietland, season two. Bookmark it, or subscribe for the latest updates. Remember, the television vulture is watching your shows. Are you?

The first season of Dietland averaged a 0.10 rating in the 18-49 demographic and 433,000 viewers. Learn how Dietland stacks up against other AMC TV shows.

Will AMC cancel or renew Dietland for season two? The ratings have been just okay. I think it will be renewed but AMC could easily cancel this show instead. I’ll keep a hungry eye out for breaking developments. Subscribe for free Dietland cancellation or renewal alerts.

9/20/18 update: AMC has cancelled Dietland so there won’t be a second season. Details here.

What do you think? Should AMC have renewed the Dietland TV show for season two? Are you sorry that AMC cancelled this TV series, instead?

Just read the series was cancelled

YES to Season 2! Joy Nash is great and the show is both creative and thought-provoking about dialogs we need to be having right now. Keep it going, please!

I started watching and continued watching even though I got extremely bored with the series. I’m not crazy about it being renewed.

I hope they renew it!

Cancel! I usually leave amc on all day but with this show or the aftershow (unapoligetic) i chanye channels right away. Its honestly terrible for a channel that hosts shows such as Twd, Preacher, Breaking bad (back when). This show just belongs on a womens network or something but please take it off amc…

Please don’t cancel the show. Shows like this is what America needs more of which is a drama filled with substance, interesting characters, and issues of importance. Please renew!!

I just binged “Dietland” and it’s SO GOOD! Not what I expected but so much better and weird and thought provoking.
Please renew it because I need to know what happens next!

Renee please. Too much left hanging and Joy Nash rocked the role of Alicia aka Plum. I love the show and do not want to say goodbye to any of the characters, even the rotten ones. So very well-acted, Monday nights will be very lonely without Joy Nash and Aisha Tyler.

I FREAKING LOVE THIS SHOW CAN’T WAIT FOR SEASON 2!!!!

It’s a highly radical and critical show, I normally do not like tv shows in general (except Star Trek), bc I do not want to waste my time. But this gave me mental strength, made me laugh, cry, think and helped being confident and strong. It is empowering. Also, it is not one-sided political, it also shows how complex politics and society are. Idk what to say just KEEP GOING PLEASEEEE!

Please give Dietland another season. Joy Nash is awesome! Tamara Tunie deserves an Emmy nod for the episode where she uncovers her character, physically, mentally, emotionally and spiritually and sexually.

“A dark comedy-drama”, really? So that’s what comedy has become, sneer-jerking…
This show is a horrible mockery of every type of person portrayed in it. The only messages I see are that fat women are disgusting babies and horrible dressers, attractive women are only attractive and successful because of who they sleep with, blacks are Uncle Toms, straight men always cheat, and everybody else is gay.
Charlize Theron, as usual, is the best actress in the mix, portraying an activist in support of fat women’s rights, something she is clueless about.
I sincerely hope this disgusting show is cancelled.

Not disgusting but it’s easy for you to cancel it: Just change the channel.

Charlize Theron???
Blacks are Uncle Toms?
What show were YOU watching?