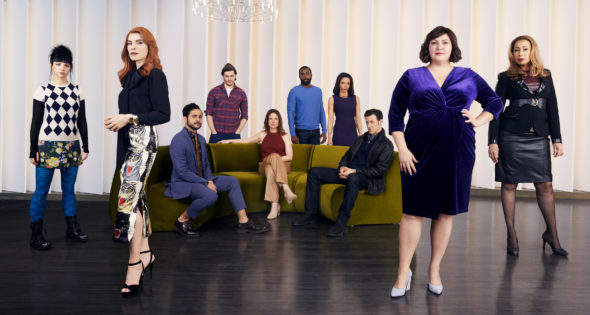 TV show description:
A dark dramedy from creator Marti Noxon, the Dietland TV show centers on Plum Kettle (Nash), a ghostwriter at a top New York fashion magazine. The satirical series follows Plum on her twisted road to self-discovery. While she is on this journey, men who have been accused of sexual abuse and assault have been disappearing, only to turn up dead — by means of violent foul play.

Plum’s lonely, little life in Brooklyn and job at Daisy Chain seem to have been fairly unremarkable — at least until now. After a lifelong battle with her weight, Plum has been saving the money she earns ghost writing the “Dear Kitty” advice column, for weight loss surgery. Once her existence is turned on its head, she finds herself torn between two worlds.

Glamorous Kitty Montgomery (Margulies) is a senior executive at Daisy Chain‘s publisher, Austen Media. As shallow as she is ambitious, Kitty believes she has a special connection with her “girls,” ie. her readers, and is certain she’s helping them improve their lives. When an unidentified group starts targeting people in her circle, Kitty has to find a new way to play the game, rules be damned.

Kitty hires Dominic (Rothenberg), an NYPD detective, to investigate a hack at Daisy Chain. He seems to take an interest in Plum, but she is not sure of his motives.

On the other hand, there’s Brooklyn bakery owner Steven (Tillman), who is Plum’s best friend. When things spiral out of control, he’s the one person from the “other side” she still keeps in touch with. Sweet, slightly servile Ben (Seefried) works at the bakery, and he has never met anyone like Plum, before.

Author of the anti-dieting book, Dietland, body-positive therapist Verena Baptist (Weigert) outed her own family for running a weight-loss program pyramid scheme. A feminist activist, Verena is on a mission: “to be assertive and bold in fighting all forms of misogyny and gender inequality.”

Calliope House is the collective Verena runs for marginalized women. She spots something in Plum and reaches out to her, in order to help her expand her worldview. Verena has always been a principled advocate of peaceful protest, but that history is called into question, when covert vigilantes start a campaign against the patriarchy.

Then there’s fast-talking Julia (Tunie), who manages an underground beauty product warehouse called, “the closet.” Although at first season seems warm and welcoming, she has controlling tendencies. She keenly wants to change women’s understanding of beauty. She tries to recruit Plum to her cause, in order to get contact information on “Kitty’s Girls.”

A Julia-loyalist, Leeta (Darke) marches to the beat of her own drummer. She quickly grows to like Plum and wants to help her learn to be more positive about herself.

TV news journalist Cheryl Crane-Murphy (King) is covering the string of murders. As someone who delves deep into her work, Cheryl has a hard time dealing with these strange events.

Finally there’s Eladio (Dávila), Kitty’s close confidant and personal assistant. While he is rather over the top, he has a good sense of humor. It’s just not clear whose side he is on — other than his own, that is.

Amidst all these people, Plum is soon torn between two sides. One side could be responsible for the attacks, while the other is fighting to empower women. Meanwhile, Plum is just trying to make sense in this world and figure out where she belongs.

What do you think? Do you like the Dietland TV series? Should this AMC TV show have been cancelled or renewed for a second season?

No question that this show should be renewed, revived, and re-appreciated!!!

I Loved Dietland! It dealt with issues rarely addressed in mainstream media, in an entertaining and compelling way. We need more television like this!

FINALLY, a show that truly represents the plethora of issues involving the dangers of living as a woman! Fat or not, we all have to deal with the brutal judgements of men, other women and OURSELVES! And no matter what we look like, what state of health and fitness, what monetary or social background (etc., etc., etc.), we struggle with perceptions and how others treat us (and how we react) based on those perceptions and the behavior that follows. This show, in it’s very short 10 episodes, has SO MUCH more to offer! I really hope the decision-makers at AMC… Read more »

I was so looking forward to season two. Just love Dietland and the whole cast. You will not find anything like it on television. Shame on you AMC.

INTERESTING SHOW. KEEPS ME COMING BACK FOR MORE.

I feel this show is well acted, with all great actors, and riveting. I’m not a feminist but I do believe in equal rights which I imagine will be a struggle for more centuries to come. But this show really rocks the boat, for the networks I imagine, but also might make some men uncomfortable. Too bad. This shows contents is long overdue and I hope the big wigs (men?) won’t decide to kick it to the curb. We’re watching you…LOL.

Wanting equal rights for men and women IS being a feminist, Pam! 😉

I’ve really like the show. Hope it gets picked up again. The chance to see a little taste of radical feminism in the mainstream.

This is the slowest moving show on TV kept waiting for them to get to the point but it was like pulling teeth sorry for the if canceled won’t be missed and if that pretty young woman gets another show give her something to say !!!!!!

So excited about this show. Have told all my friends and coworkers to check it out. Time slot may be difficult but I will make it work. So looking forward to Plum’s journey and can’t wait to find out more about Jennifer. On a different note, so excited to see Tamara Tunie in another terrific role. I so loved her in The Red Road, and am still incensed that it was cancelled after one season. Fingers crossed that Dietland will thrive and continue to grow!

I watch it on google play so time slot shouldn’t concern anyone anymore.

This is the greatest show to come around since The X Files. It has it all including some references and scenes that make me cringe a little but it still baits me along into the mysterious plot. It would make a good daily soap opera too.

That a cool idea, John!
I hate soaps! I was addicted to most ABC’s (General Hospital, mostly) from pre-teen through young adult and had a really difficult time extracting myself from those ridiculous story-lines!
However, it would’ve been REALLY awesome and helpful to have THIS show as a daily soap at those ages!
What kind of crap I could’ve avoided and helped others through had I had the training/demonstrations that this kind of show provides.
If this was a daily soap, I think my DVR would be full pretty fast! 🙂

I, luckily, have a DVR. A few networks are really great about leaving their shows on OnDemand. AMC does have some issues with keeping their shows up for the length of the season, though.
Netfilx seems to have their episodes up, forever, though.
I hope you find a better venue to keep up with your shows, Jean! 🙂