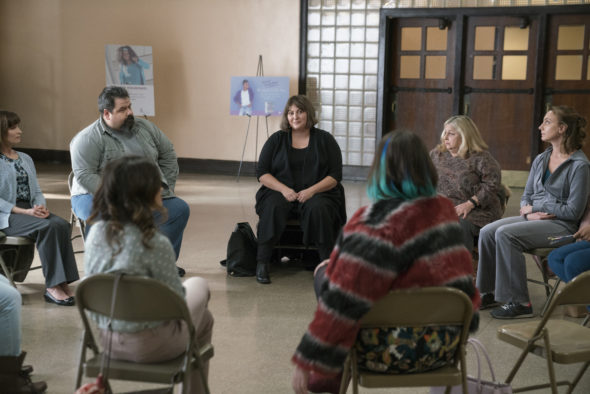 How satisfying is the first season of the Dietland TV show on AMC? As we all know, the Nielsen ratings typically play a big role in determining whether a TV show like Dietland is cancelled or renewed for season two. Unfortunately, most of us do not live in Nielsen households. Because many viewers feel frustration when their viewing habits and opinions aren’t considered, we’d like to offer you the chance to rate all of the Dietland season one episodes here.

What do you think? Which season one episodes of the Dietland TV series do you rate as wonderful, terrible, or somewhere between? Should AMC cancel or renew Dietland for a second season? Don’t forget to vote, and share your thoughts, below.

9/20/18 update: AMC has cancelled Dietland so there won’t be a second season. Details here.

I think the show is just ok. I liked it in the beginning, but then I felt the message was all over the place. What are the writers trying to convey? Being fat and not being accepted? Being a woman in society and being discriminated against and violated? That it happens just to fat women or all women? I’m confused. Julianna Margulies is horribly thin in this role. Is this on purpose to prove a point? That only thin women get to be in power? And the women in Jennifer are not the most attractive. Why can’t attractive women be… Read more »

I had to watch these twice (or more) to wrap my head around what this show was saying. Each time, I understood more, and had more questions. I am very intrigued and want to see where this show goes! Keep it going!

My husband and I taped this then watched 6 consecutive episodes. We both liked it and think it has a relavent and relatable storyline with interesting characters and an intriguing mystery with lots of potential. Please don’t cancel as we cannot wait to see where this story goes.

I think the show is wonderful because it not only focuses on diet but on a female’s image as a whole. It allows females to look from within themselves to find true happiness as they accept who they are on the outside no matter what the public may think.

There are some intriguing elements, so I keep watching bc I’m a fat girl. I’m not yet sure whether it has the critical teeth to do anything but remind fat girls of our lives. It depends a lot upon who’s watching & whether any among us viewers might take what we see & really consider it, write about it, see it in its right-now zeitgeist. Part of me wants to, but I’m not sure whether it has that certain something to really spark questions & theses. I’m considering it as sth that might, bc I’m a critic like that; I’m… Read more »

So far you are the only negative one. Good….I wrote some negative things it about too. The writers were all over the place. They lost their message on what they wanted to convey. Nothing made sense after awhile. Started out good. But had nothing to do with Diets. It should be called Victimhood! 🙂