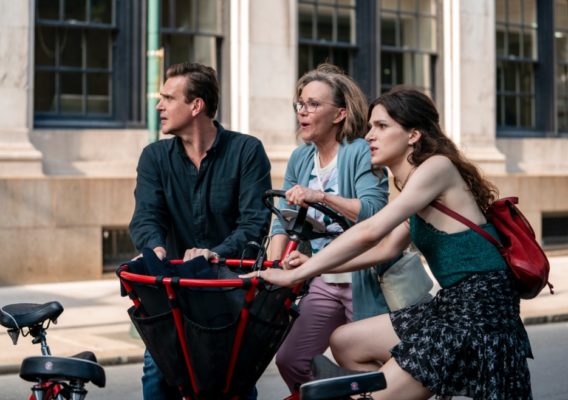 TV show description:
An anthology drama series, the first season of Dispatches from Elsewhere revolves around four ordinary people. They each feel that there’s something missing in their lives, but they can’t understand what it is.

Fredwynn (Benjamin) is an obsessive conspiracy theorist who’s always trying to solve the puzzle. He’s ambitious to the point of having no real personal relationships and needs to learn to let people in and to express empathy.

Janice (Field) is a former homemaker, now an empty-nester, and her husband of 30 years is in hospice. She’s realizing that nothing lasts forever and that her life didn’t turn out the way she thought it would. As Janice is beginning to question what life is without her partner, she needs to reclaim her identity.

Peter (Segal) is a regular guy who feels he’s living a meaningless life, without joy or pain. On this journey, he learns to wake up, to take risks, to enjoy life, and to feel and be emotionally vulnerable.

Meanwhile, Simone (Lindley) has spent her whole life feeling like she was invited by mistake. Her insecurities regarding not fitting in and not feeling like herself constantly serve as progression roadblocks. As she makes a huge life change, she still struggles with the feelings of belonging and acceptance that she’s hoping to find.

The diverse foursome is brought together by chance (or is it by design?) when they stumble onto a puzzle hiding just behind the veil of everyday life. As they begin to accept the mysterious ‘Dispatches from Elsewhere’ challenges, they come to find that the mystery winds deeper than they imagined. Their eyes are opened to a world of possibilities and magic.

Octavio Coleman (Grant) is the unique and forever elusive narrator who shares key details about our four main characters as he guides us all on this adventure.

What do you think? Do you like the Dispatches from Elsewhere TV show? Do you think it should be cancelled or renewed for another season?

I know that no one asked, and that I’m just throwing my two cents into the void of the internet, but here’s what I thought of the show: I loved it! It was a wild and engaging ride, constantly challenging my understanding of what was real and what wasn’t. Making me wonder what the big secret of the narrative REALLY was. As well as making me care and love people in under 2 minutes of their appearance in the episode. With overtones of mystery, Unity, and challenging us to rethink our preconceptions of what’s normal, Combined with undertones of in-depth… Read more »

I hope it’s over!

This show had promise, but it became too hokie and disconnected. I think it will be cancelled.

it should be dispatched elsewhere for instance ANOTHER PLANET?

I agree. What an awful show. My opinion.

Yes, it is an AWFUL show. Sorry, but that is my opinion. I thought it was going to be a weird, but charmingly different show… It turned out to be mainly a twisted love story that just grossed me out and the rest of the plot is so weird that nobody, I mean NOBODY knows what is going on with it. I gave up on it when the transexual and the guy started making it together. I don’t want to watch that stuff. If that is your thing, fine… but don’t put it on so close to prime time. Make… Read more »